MENUMENU
About
Home > About > Exhibits > 9d 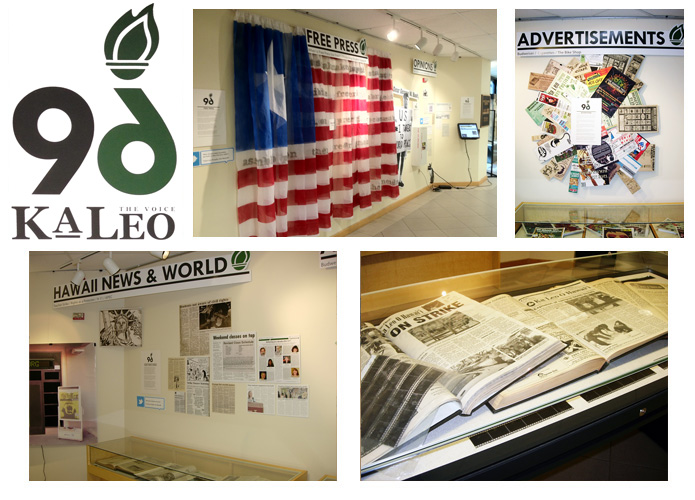 The University of Hawai`i at Manoa student newspaper celebrates its 90th anniversary with a multi-media exhibit at Hamilton Library’s bridge gallery that depicts highlights from the past ninety years.

Curated by UH graduates (Erica Lenentine, BA-Art, 2011, and Chad Kikuchi, BA-Art, 2010), “Ka Leo 9d” asks viewers to tweet their responses to six questions scattered through the show and inspired by the content.

“When should student journalists put limits on their free press rights?” was prompted by comics and satire that outraged some in the UH community who thought Ka Leo’s cartoonists and writers had gone too far. Some of those cartoons are on display and shielded by an opaque American flag with the First Amendment stenciled upon the white stripes. By opening the flag, people can answer the question.

Ka Leo has had 104 editors in its 90 years and many of those have gone onto careers for national and local newspapers and magazines and television stations. Front pages from the decades are displayed, along with touch-screen access to the website, kaleo.org, which provides a link to an exhibit slide show.

Throughout Ka Leo’s ninety years, students have made all content decisions. Curators Lenetine and Kikuchi wanted to engage people in a discussion about those decisions. Cartoons from the past were blown up and printed on vinyl stickers applied to the floor.

Ka Leo staffer and Academy for Creative Media major Shinichi Toyama produced a 10-minute documentary about the production of the newspaper’s “Nightlife Guide.” The repeating video includes interviews with editor Will Caron and other staffers, who explain the process for producing the special issue.

Other exhibit sections include: Opinions, Sports, Hawaii News and World, Advertising, Campus Controversy that looks at crime, Proceed with Caution (that depicts swimsuit issues from the past), and the Right to Be, which shares one of the most controversial issues covered by the paper.

In 1990, Joey Carter, a Caucasian student, wrote a commentary for the paper in which he objected to being called haole. UH Professor Haunani-Kay Trask wrote a response that generated a year-long struggle over free speech and Native Hawaiian rights. Many of those stories will be available as PDFs in February when the exhibit provides a QR code that will guide smart phones to a URL where the PDFs will be loaded.

Responses about the exhibit can be tweeted with the hashtag #kaleo90