Asia Collection Department’s new exhibit, “Japanese Suicide Bombers, 1932” has been curated by our guest curators, Dr. Hanae Kramer of UHM School of Communications and Mr. Scott Kramer. Please come and learn part of history induced by World War II. The exhibit is from November 6, 2016 through January 12, 2018, on the 4th Floor of the Hamilton Library Asia Elevator Gallery. Please stay tuned for an announcement of Dr. Kramer’s gallery talk. 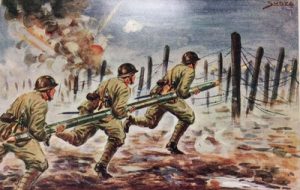 Three Japanese sappers became gunshin (war gods) when they blew themselves to pieces while attacking a Chinese military stronghold during the 1932 Shanghai Incident. When reports of their suicidal dash reached the home front, people across Japan began praying to them at Shinto shrines and Buddhist temples. Parents viewed the three fallen soldiers as role models for impressionable boys. The media took every opportunity to extol their virtue and heroism, spreading the gospel of selfless patriotism. The legend of Nikudan san’yūshi (Three Flesh Bomb Heroes) was born from this social context. The commercialization of them followed shortly thereafter. Merchants pasted their likenesses on countless goods and advertisements. The scope of products they could endorse from beyond the grave was almost without limit: medicines to insecticides, kimonos to toiletries, pantry items to stationary supplies, children’s toys to hard liquor.

The public at large had no idea that the Nikudan san’yūshi narrative was a fabrication.