How To Request Work 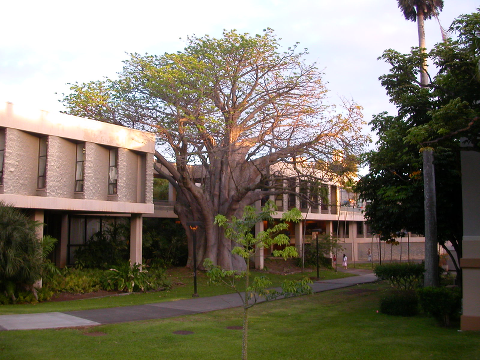 The University of Hawai‘i Mānoa campus has an amazing collection of plants. Our hope is that by providing tools to help people identify the plants, and making information about this collection more accessible, we can bring the flora from the background into the conscious life of the community, and together reimagine the university environment as a botanical garden, just as Joseph Rock conceived it to be when he planted trees here as the university was being established.

In the century since then, the collection has been augmented by horticulturalists, botanists, visiting scholars and dignitaries, and other plant enthusiasts, and now includes more than 6000 plants in over 700 species — some of which are represented by numerous distinct varieties. We are currently inventorying the collection, and making information about plants accessible though the online Campus Plants map. The map can be used to identify the plants around you, or to search for plants by name or characteristic, or by a number of special collections, for which we're currently developing more information.

Biogeography of the Campus Plants

One of the characteristics which people often want to know about is where plants are from — i.e. their biogeography. This is especially salient here in Hawai‘i because we have such an amazing native flora, and because we also have a set of important cultural plants. We can think of the plants in Hawai‘i as belonging to one of three groups, which are associated both with how and when they got here, and also with different ways of looking at the world and the plants in it, which shapes the ways we see the campus landscape.

Everyone that's come to the Hawaiian Islands has had to cross vast ocean distances to do so. Without help from ships and planes this was much more difficult, although many of the ancestors of the native Hawaiian plants did fly here, carried by birds one way or another. Over the long evolutionary eons, it was much easier for ancestral plants to speciate into different niches than it was for new plants to get here, so most of the native Hawaiian species evolved here and are endemic to the islands (occurring nowhere else in the world). The ancestors that did arrive found a plants' paradise, with no large herbivorous mammals to eat their leaves or trample their roots, and in the process of natural selection most new species lost defensive mechanisms. As a consequence, they became quite vulnerable when mammals were later introduced by humans. Hawaiian plants are often rare, unique, and imperiled, which makes them important not only for the interest they hold, but also for their conservation.

The next group of plants to arrive in Hawai‘i came with the first people who settled here, the Polynesian voyagers who became the Hawaiians. About thirty plants came with them, and were the ones chiefly used, for cordage, clothing, medicine, food, and more. Imagine having only thirty plants for everything you need! Fortunately this is an amazing group of plants, and many, such as the coconut, have multiple uses. In Hawaiian cosmology these plants are related to people through common ancestry, and through kinolau associations, as well as through the interactions of cultivation and use. Because Hawaiian culture is native to these islands, these are also often called native plants, which is inaccurate in a scientific sense, but reflects the popular understanding that these heritage plants have a greater time depth and a longer interrelationship with Hawaiian landscapes than more recent introductions.

The third group of plants began arriving in the islands with the first ships that came from Europe. The period before this is often called "pre-contact" but this is a misnomer because Hawaiians were in contact with Southern Polynesia for several centuries. Likewise, calling the new species "European introductions" is inaccurate, since few species are from Europe (most are from the African, American, Asian or Oceanic tropics) and the people who brought them — sailors, traders, travelers, immigrants — were from all parts of the world. Introduction of new species was well underway by the beginning of the 19th century, with many experimental crops planted in Honolulu and in Mānoa. After the catastrophic population collapse of native Hawaiians (due to microscopic introduced species) and the economic division of the land into landscapes of production (for commodities like sugar and pineapple) and landscapes of consumption (for estates and houses), large shade trees and showy ornamental plants became particularly important. At the same time immigrant workers brought new sets of cultural heritage plants which became integrated into local culture. After introduced grazing animals devastated much of the native forest, early efforts at ecological restoration employed introduced tree species in the hopes that they would create new forests faster. The results can be seen by looking into the back of the formerly denuded Mānoa valley.

Each of these groups of plants are highly valued, but often by different people and for different reasons. People who value natives often feel a moral imperative to take care of the species, and assure their continued survival in the landscape. For native plant enthusiasts, it is only these plants that really convey a "Hawaiian sense of place," since they embody the unique ecological relationships that produced them, and without them, landscapes may seem generic and artificial.

The cultural heritage plants are usually valued in more personal, relational terms. They connect people with the land, and undermine a tendency to separate nature from culture. On campus the canoe plants help create the "Hawaiian place of learning" that is one of the University's key values. Landscapes without these plants can feel alienating and impersonal.

Cosmopolitan plants are by far the most commonly seen in urban Hawai‘i today, and their showy flowers and broad canopies fit the popular idea of Hawai‘i as a tropical paradise. The landscaping heritage of the estates depends on plants arranged to sensually please the viewer. This is sometimes called an "aesthetic" orientation, but it is important to note that all three of these ways of valuing landscapes are aesthetic, in that they are deeply felt by observers.

Its also worth noting that there is plenty crossover between these three aesthetics and the three groups of plants. While native plants are a conservation priority, we also have several cosmopolitan species on campus that are imperiled in their places of origin. Maintaining these plants supports a global ecological strategy, while other botanical gardens across the world help assure the survival of Hawaiian species. It is also important to conserve the agrobiodiversity of endemic varieties within the introduced canoe plants. For instance, although there were as many as 368-482 indigenous cultivars of taro around 1900, only 65-73 are still extant (Winter 2012) — and about 60 of these are maintained on campus at Ka Papa Lo‘i o Kānewai.

Relational aesthetics also embrace some of the introduced plants, particularly those which are cultural keystone species for the various groups that have settled in Hawai‘i, as well as those which have been incorporated into indigenous cultural practices such as la‘au lapa‘au. Some of these may be found in curricular gardens at the Kamakakūokalani Center for Hawaiian Studies and the College of Education.

And of course many (though not all) of the native and cultural plants also please the sensory aesthetic. So the association of plants and values isn't rigid, but seeing the general tendency may help in understanding different landscape values.

One of the tricky things in managing the campus landscape is balancing these three aesthetic perspectives! It can be easy for someone who is totally immersed in one system to dismiss the other values, or to believe they should be subordinated. What we hope to do in presenting more information about the campus plants is to make these values more visible, with the hope that the diversity of landscapes we have on campus can be better enjoyed. One of our current projects is to bring greater visibility to the special collections of plants that we have on campus. Some of these can now be found under a search menu on the plant map, including several education gardens, the Memorial Trees dedicated to notable people over the years, the Exceptional Trees recognized by the State designation, and the Joseph Rock palm collection. We're currently working on developing guides and interpretive materials for others. Last year at a conference on Botanical Gardens, we realized that while many gardens are deliberately planted to spatially segregate their various collections, our collections are all interwoven through our landscape, which seems both beautiful and fitting. After all, most botanical gardens don't have their public living and working on site(!), and assume they will come to the plants; here, however, the distribution of the collections throughout the campus brings the plants to the community. It also reminds us, once again, of how the various strands of nature and culture are connected in Hawai‘i.

We hope you enjoy the campus plants! We like to thank them for the ecological and historical memory they carry, and for all the myriad values they give us! 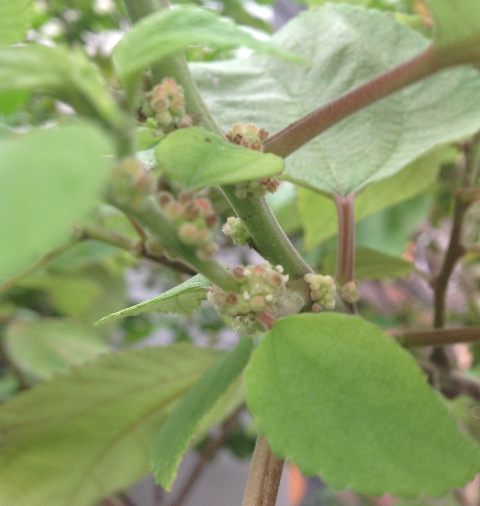 Māmaki (Pipturus albidus) an endemic plant of the Nettle family without stinging defenses.
Used for tea and kapa, and favored by the endemic Kamehameha Butterfly. 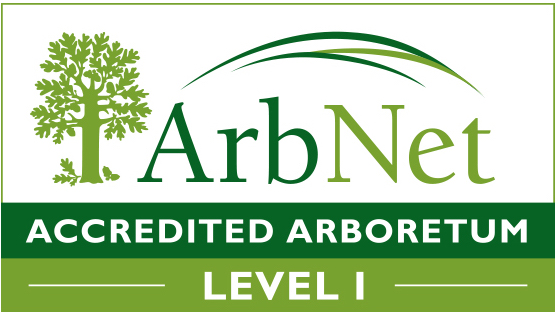