The buildings that house the Center for Korean Studies were designed by Korean architects Chong In-guk and Na Sang-gi, with modifications and final blueprints by two Hawai‘i architects, Jo Paul Rognstad and Vernon Kim. Ground was broken for the start of construction on July 1, 1974. The building was completed in December 1979. An extensive exterior renovation was carried out from 1998 to 2001.

Kyŏngbok Palace in Seoul provided the design inspiration for the buildings. The main building is adapted from the design of the Palace’s throne hall, called Kunjŏngjŏn, in which the king’s coronation and court rituals were held. Inside this traditionally styled exterior, there are two floors of offices and meeting rooms, a classroom, an auditorium, a small library, and a third-floor storage area. The detached octagonal pavilion was based on the design of the Hyangwŏnjŏng Pavilion, located in the middle of a lotus pond some distance from the throne hall on the Kyŏngbok Palace grounds.

The distinctively Korean carpentry, stonework, painting, and roofing were done by craftsmen recruited in Korea and brought to Hawai‘i exclusively for this project. Dark green glazed Korean ceramic tiles were shipped to Hawai‘i for use on the roof, and the exterior was painted in the brown and green hues of traditional palace architecture. The eaves and roof supports were finished off in the decorative bright colors and intricate designs of the tanch’ong painting style.
Throughout the building, the Center displays items from its collection of art and artifacts donated by individuals and organizations. These objects include replicas of several of the national treasures of Korea, as well as original paintings, pottery, figurines, scrolls, calligraphy, and furniture. The collection helps to enhance the appearance and educational value of the Center. 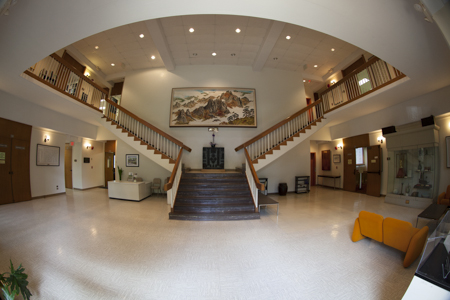 Hanging above the stairway in the Center’s main lobby is a large painting by Min Kyŏng-gap (Yusan). Titled Ch’ŏnhwadae, the painting depicts the famed mountain Soraksan. Yusan traveled to the Sorak range on Korea’s eastern coast for a month of study and then spent six months completing the work. The painting was a gift of Pak Yong Hak and Kim Jin-Heung to the Center.

The second-floor of the Center pavilion houses The Four Seasons, a series of eight paintings by Song Su-nam (Namch’on). The artist visited the Center in April 1979 and decided to paint a scene for each of the eight sides of the pavilion. Four of the paintings depict landscapes of winter, summer, spring, and fall. The other four paintings are renditions of the “four gentlemen,” the Confucian symbols found in traditional paintings: bamboo, chrysanthemums, orchids, and plum blossoms, representing the qualities of integrity, productivity, refinement, and courage. The series was a gift of Kim Seong-Jin to the Center.