On behalf of the CKS, I wish you and your families and friends are all doing fine in these difficult circumstances. As you know, we are experiencing an unprecedented situation throughout the State. The Governor issued a state-wide, mandatory 14-day quarantine for visitors and returning residents as of today. All residents are ordered to stay and work from home through April 30.

The Center staff have been working from home since Monday, March 23, 2020, and the Center building will be kept closed until April 30, 2020 unless there is any further notice. However, the Center staff are working normally through the Zoom, emails, and other means of communication. In case you need contacts for the Center faculty members, staff, and visiting scholars, please consult this link.

I am increasingly feeling that this challenge could be an opportunity for all of us to move ahead to strengthening our activities using the internet, SNS, websites, and multimedia contents. We should not let the COVID-19 prohibit us from working for Korean studies. I hope our activities will be continuing online this semester. Let’s try to be creative finding ways to strengthen our online and multimedia-based academic activities. I hope all of you are doing well and healthy. Thank you!

In light of the current COVID-19 situation on campus, the Center for Korean Studies adjusted the hours of availability of the Center building from 8:00 am – 3:00 pm as of Tuesday, March 17, 2020.

Only those with a UH ID card or invited guests will have access to the building as a measure to minimize risk for students, faculty, and Center staff in observance of the recommendations by the Hawaii Department of Health and the United States Centers for Disease Control and Prevention.

This measure is effective until Friday, March 27, 2020 at this time, which might be extended. We apologize for this inconvenience. The Center staff are working the full hours, and they will be reachable at 956-7041 or 956-2212. Please stay safe and healthy! 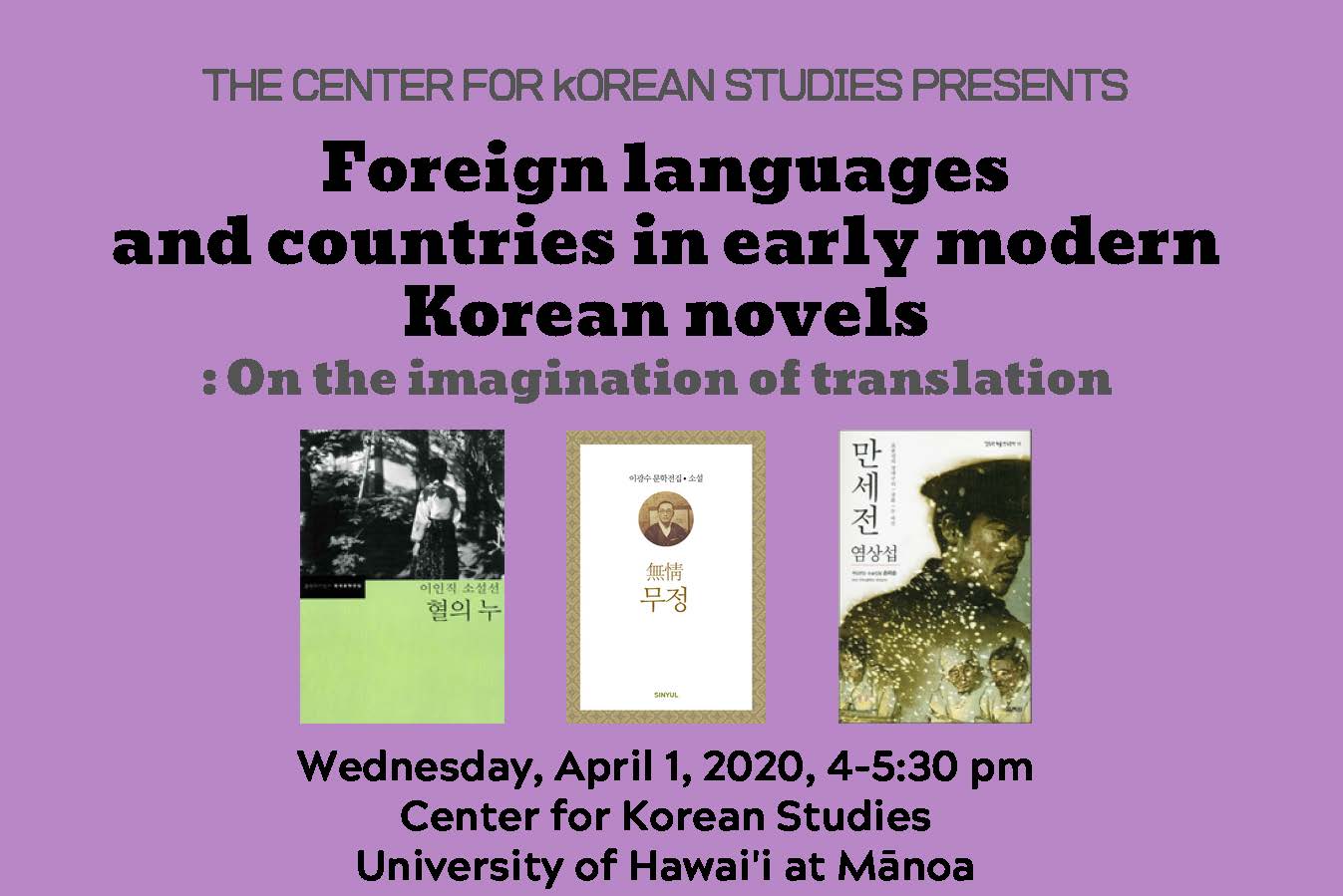 The Center for Korean Studies presents: a colloquium on "Foreign languages and countries in early modern Korean novels: On the imagination of translation" by Professor Kyeong Seok Seo.

The presentation will be in Korean language with English summary.

Dr. Kyeong Seok Seo is a professor at Hanyang University in Seoul and currently a visiting scholar at the Center for Korean Studies at UHM. Dr. Seo earned his Ph.D. in Modern Korean Literature from Seoul National University. He works to redefine cultural specialties, including the ethical characteristics inherent in Korean modernity through the exploration of Korean literature and culture. 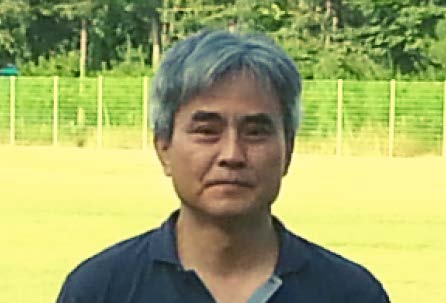 The Center for Korean Studies at the University of Hawai'i at Manoa in cooperation with Korean Adoptees of Hawai'i presents:

Create an original 3-min video in English or Korean to share your Korean food stories:

Favorite comfort Korean food, a new way to enjoy the food, family’s tradition and culture related to the food, and more fun stories!

Winner(s) will receive a cash prize and selected videos will be presented at the event. Interested individuals or groups, please email your video or its YouTube link at coord@hawaii.edu by March 15, 2020.

This event is supported by the Core University Program for Korean Studies through the Ministry of Education of the Republic of Korea and the Korean Studies Promotion Service of the Academy of Korean Studies (AKS-2015-OLU-2250005). The University of Hawai‘i is an equal opportunity/affirmative action institution. 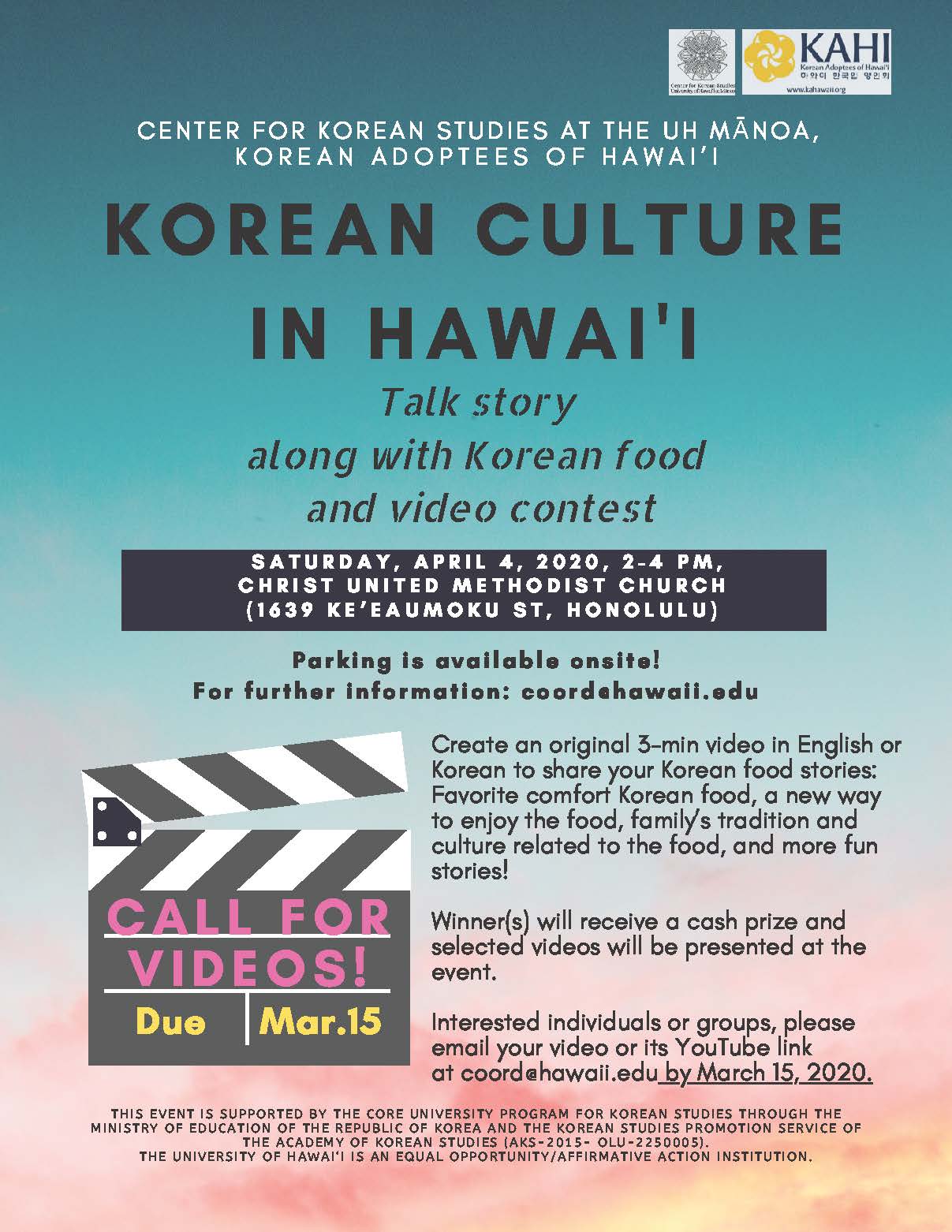 [This event has been cancelled due to COVID-19.]

The Center for Korean Studies presents:

The hottest news in the spring and summer of 2018 in South Korea was the “crisis” of Yemenis asylum seekers in Jeju island. The Center for Korean Studies invites Dr. Nora Kim to talk about how the context of perception for Indochinese refugees in South Korea had changed over two decades as the geopolitical conditions changed during the same period of time. Dr. Kim is an associate professor at University of Mary Washington. She received her Ph.D. in sociology from University of Wisconsin-Madison.

Nostalgic Nationalism: National Flag Carriers’ effort to take the nation back to the ‘good old days’

Along with the 2016/17 Candlelight Revolution, there was a conservative political counter-movement, run by the National Flag Carriers. The Center for Korean Studies will hear the analysis of Dr. Gil-Soo Han about the voices of the ‘conservative’ groups which are not homogeneous and to understand their desires and aspiration in regard to Korean nationalism and identities. Dr. Han is an Associate Professor of Communications and Media Studies in the School of Media, Film and Journalism at Monash University.

Due to COVID-19, the AAS2020 Boston Conference is cancelled!! See below!

It is with deep regret that we inform you of the cancellation of the AAS 2020 Annual Conference in Boston, Massachusetts.  Over the past few weeks, the AAS leadership and staff have been monitoring worldwide developments related to COVID-19. With many countries and regions recommending self-quarantine and many institutions strongly advising staff, faculty and students to restrict travel, we know it is no longer practical nor ethical to continue with our annual conference.

The AAS is committed to refunding the registration of all participants and exhibitor fees. Please view the refund policy. We also recognize that the AAS will experience a significant financial setback due to cancellation fees levied by the hotels and convention center as well as a loss in conference revenue. Many of our registered attendees have expressed a desire to donate their registration fees to the AAS in lieu of receiving a refund. We greatly appreciate such generosity and support. If you are interested in donating your registration fee, please fill out this form.

The Center for Korean Studies co-sponsors with the Center for Chinese Studies and the UH Department of East Asian Languages and Literature:

“In 2012 I published The Nanjing Massacre: Poems (Bamboo Ridge), recreating this historical event—when Japan invaded China in 1937, ultimately wreaking havoc on the capital and its surrendering military defenders and civilian inhabitants. Through my 104 narrative poems I wanted to describe what those involved, both victims and perpetrators, experienced on a human scale, imagining what James Wood has called “the plausibly hypothetical"...... Since then I have been working on a new series about life in Honolulu Chinatown at the turn of the last century, telling the everyday stories of our pioneer generation of Chinese immigrants here. Totaling so far about 50 poems, they describe the experiences of a variety of different Pake: the physical separations sometimes spanning lifetimes of single men in Hawaii and their families back in the villages; the hard work of fishermen and laundry workers, as well as Chinese prostitutes with their “100 husbands”; the intermarriage between Chinese and native Hawaiians and the responses of their respective families and friends; and the racist-inspired circumstances leading up to the Chinatown Fire of 1900.... These are meant to be unique stories about unique individuals in a unique community at a unique time. Nonetheless, while not overt, I hope that my sharing of them can offer some perspective and commentary on contemporary challenges we face regarding immigration, and the effects on immigrants’ homelands and host communities.” 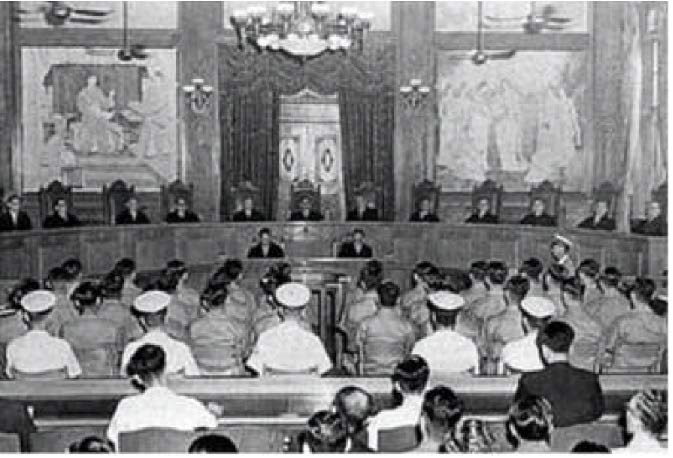 The Center for Korean Studies co-sponsors with the Center for Japanese Studies and Departments of History, East Asian Languages & Literatures,

"War Crimes Trials in Japanese Literature: The Question of Korean Representation on the War Criminal Docket" 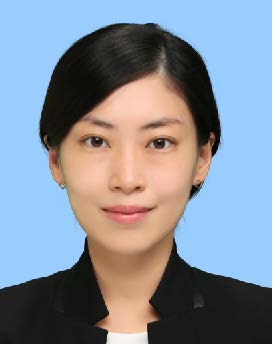 Dr. Younglong Kim, UH Manoa Visiting Scholar, speaks on a genealogy of relevant works in Japanese literature, focusing specifically on those featuring Korean war criminals. These range from the film script “A Wall-Mounted Room” [Kabe Atsuki Heya] published in the 1950s by Abe Kōbō to Zainichi playwright Chong Wishing’s 2018 “Macbeth Below the Equator” [Shekidō no Shita no Makubesu].

By examining Korean representation in the context of war crimes trials, this presentation seeks to clarify how literary works engaged with issues of colonial and postwar responsibility never fully settled in the course of the historical trials.