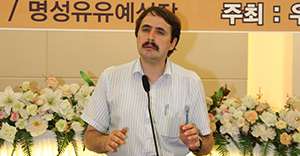 Socialism in the Korean context usually suggests images of North Korea, one of the few states claiming to continue the twentieth century’s state socialist tradition. But the influence of socialism since 1918 (when the first Korean socialist group was formed), Tikhonov says, is by no means limited to North Korean experiences. He points out that in the colonial period (1910–1945), many of the Korean intelligentsia’s basic epistemological assumptions were shaped by Marxist ideas. Many of these assumptions survive, to a certain degree, even in today’s South Korea, a model neo-liberal state with an anti-Communist past.

In short, socialist/Marxist tradition has played an important role in building both Koreas’ modernity formations during the past century. Professor Tikhonov will offer a reappraisal of this role and some additional thoughts on the relevance of Leftist thought for Korea in the time of worldwide neoliberal crisis.

Vladimir Tikhonov is a professor in the Department of Culture Studies and Oriental Languages at the University of Oslo in Norway. He earned his Ph.D. in Korean history at Moscow State University and is a naturalized citizen of the Republic of Korea.

Tikhonov is the author or co-author of some forty monographs and eighty-five academic articles. His research and writing center on the history of Kaya and Silla, the history of Korean Buddhism, early modern ideology and worldview, Social Darwinism, nationalism, the Korean Communist movement, Korean Marxist thought, and Korean diasporas. He has also been a frequent contributor to periodical publications in South Korea.

The Forum on Critical Issues in Korean Studies was inaugurated in 2010 to bring outstanding scholars from around the world to the University of Hawai‘i Mānoa campus for discussions of important contemporary topics related to Korea. The Forum is free and open to the public.

For further information, including information regarding access for the handicapped, telephone the Center for Korean Studies at (808) 956-7041.

This presentation is supported by the Doo Wook and Helen Nahm Choy Fund. The Center is located at 1881 East-West Road on the UH Mānoa campus. The University of Hawai‘i is an equal opportunity/affirmative action institution.

The Department of Asian Studies at Cornell University seeks to hire a candidate with a strong track record of research and teaching competence in the literature and culture of Korea, in any period. Preference will be given to candidates whose work engages with issues related to trans-regional interchanges, including those that predate or exceed contemporary national boundaries. Candidates who complement existing departmental strengths in religious studies, classical and contemporary literatures of Asia, and media studies/digital humanities are preferred.

The successful candidate will be expected to offer both undergraduate- and graduate-level courses in Korean humanities generally and in their specific area of expertise, as well as to read primary-language texts with graduate and advanced undergraduate students as needed. Applicants must have a Ph.D. in a relevant field in the humanities in hand by July 1, 2020; a publishing record or strong potential for publishing is important.

To apply, submit electronically, by November 1, 2019, a letter of application, curriculum vitae, reading sample, statement of teaching experience, and three letters of recommendation, as well as a Statement of Contribution to Diversity, Equity, and Inclusion (http://facultydevelopment.cornell.edu/information-for-faculty-candidates/) at https://academicjobsonline.org/ajo/jobs/14481.

Lee, who is an economics professor at the University of Hawai‘i at Mānoa, is chair of the National Transfer Accounts (NTA) project. NTA is a global network dedicated to improving understanding of how population growth and changing age structure influence economic growth, gender and generational equity, public finances, and other important features of the macro-economy.

The NTA project (ntaccounts.org) was officially launched in 2004. Since that time, it has provided data to world policymakers in key areas such as social welfare, health, aging, education and gender equity.

Lee earned his bachelor’s and master’s degrees in economics from Seoul National University and his Ph.D. in economics from Michigan State University. His research focuses on population aging and social welfare issues. In particular, he has investigated the link between population aging and labor market issues, with particular emphasis on Asian economies. Given its empirical and applied nature, a substantial portion of his research involves estimation of economic models using data sets.

Lee's publications include numerous articles and eleven edited books. His recent edited books include Aging, Economic Growth, and Old-Age Security in Asia (Edward Elgar, 2011), Inequality, Inclusive Growth, and Fiscal Policy in Asia (Routledge, 2015), Social Policies in an Age of Austerity (Edward Elgar, 2015), and The Demographic Dividend and Population Aging in Asia and the Pacific (special issue of the Journal of the Economics of Aging, 2016).

In addition to his position in the Department of Economics at UH Mānoa, he is a senior fellow at the East-West Center. He served as director of the Center for Korean Studies from 2013 to 2018.

The Asian Studies Program in the University of Hawai‘i at Mānoa School of Pacific and Asian Studies has launched a new master of arts in Asian international affairs degree program.

Program applicants must have a college degree from an accredited institution plus at least two years of work experience. No background in Asian studies is required, and there is no foreign-language requirement.

Applications are being accepted for the spring 2020 semester, with classes to begin January 13, 2020. To apply, contact Dr. Young-A Park at yapark@hawaii.edu.

For further details about this program, see https://manoa.hawaii.edu/asianstudies/?page_id=62.