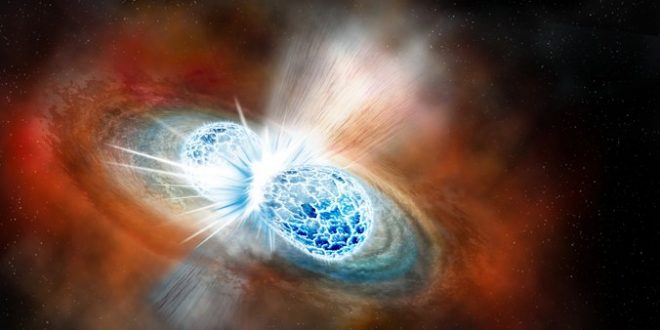 A binary neutron star merger and resulting kilonova explosion. Illustration by Robin Dienel courtesy of the Carnegie Institution for Science

UH part of astronomical discovery that changes understanding of universe

University of Hawaiʻi researchers played a major role in one of the most significant astronomical discoveries in decades—the first observations of a binary neutron star merger and resulting kilonova explosion. The discovery fundamentally affects our understanding of the origin of many of the elements common on Earth and in our bodies.

UH astronomers, together with their international collaborators, announced the discovery in articles published today in Science, Nature and The Astrophysical Journal. They were part of the largest armada of telescopes, researchers and astronomers ever mobilized after the gravitational waves from a binary neutron star merger were detected for the first time.

It started on August 11, when two neutron stars, the remains of dead massive stars, were spiraling toward each other in a distant galaxy, generating gravitational waves as they got closer and closer before colliding. Back on Earth, the Laser Interferometer Gravitational-Wave Observatory, whose creators were recently awarded the 2017 Nobel Prize in Physics, detected these ripples in the fabric of space. A mere 1.7 seconds later, NASA’s Fermi Space Observatory detected a burst of high-energy gamma-rays. Alerts of the observations with a rough estimate of the location were quickly sent to the world’s astronomical community.

Astronomer Benjamin Shappee, who joined the UH Mānoa Institute for Astronomy in September, is part of the One-Meter-Two-Hemisphere (1M2H) team that leapt into action. This small team, a collaboration between Carnegie Observatories and UH’s Pan-STARRS survey facility on Haleakalā, Maui confirmed that the object was indeed a binary neutron star merger and kilonova. Pan-STARRS obtained new images of the source and compared them with previous images taken by Pan-STARRS of the same area, and with the brightness initially observed by the 1M2H team. They found that the object was dimming rapidly.

“A new astronomical object fading this fast is unheard of,” said Ken Chambers, director of the Pan-STARRS Observatory. “This was the signature of a kilonova and the Pan-STARRS Team alerted the world to the unique nature of SSS17a.”

After the Pan-STARRS confirmation, many of the observatories in the world and in orbit changed course to observe the phenomenon in a massive international effort unprecedented in the history of astronomy.

Changing our understanding of the universe

The picture that emerged over the following two weeks was that the bluish object seen initially, changed into a redder and strangely colorful object the likes of which has never been seen before. The final piece of the puzzle came from spectra, a band of colors, like those in a rainbow, taken by the UH astronomers and their international collaborators on a variety of telescopes.

“The fingerprints of key elements are there,” said Chambers. “Heavy elements that are found on Earth and even in our bodies.” It was long believed that these heavy elements came from single massive stars exploding in a supernova long before our solar system was formed.

“Now there is a new blossoming field of study in astronomy,” said Shappee. “This will be the focus of hundreds of astronomers, from around the world, for months and years to come.”

More than 1,000 institutions are expected to produce scientific papers authored by more than 3,500 astronomers. Shappee, Chambers are other UH researchers are lead- and co-authors in the articles published today in Science, Nature and The Astrophysical Journal.