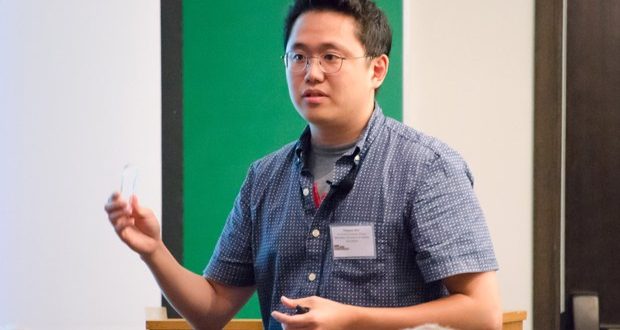 Sangwoo Shin, a University of Hawaiʻi at Mānoa assistant professor in the College of Engineering‘s mechanical engineering department, and other researchers have invented a prototype for a low-cost measurement device that can simultaneously measure the zeta potential of colloidal particles and solid surfaces. The other researchers are at Princeton University in New Jersey and Unilever R&D in the United Kingdom.

The research paper, “Low-Cost Zeta Potentiometry Using Solute Gradients,” was published in the current issue of Advanced Materials, the acknowledged top national journal in materials science. Colloidal particles are microscopic solid particles suspended in fluid, and their behavior is highly influenced by the zeta potential. The invented method allows measurement of the zeta potential at a significantly lower cost than utilizing a current state-of-the-art device, which sells for more than $50,000.

“Right now, there is no commercially available cost-effective device that allows measurement of zeta potential of the colloidal particles and the solid surfaces,” said Shin. “This discovery would be revolutionary for pharmaceutical and educational purposes, because the invention will allow for building of a measurement device utilizing materials that include a USB digital microscope, which can be purchased for under $50.”

This is not the first research accolade in 2017 for Shin. In May, it was announced that a team led by Shin and other scientists, including a researcher at the University of Limerick in Ireland, found a promising, inexpensive way to clean water using carbon dioxide. Their study was published in the May 2017 issue of Nature Communications.

Also in May, Shin was selected as the winner of a statewide competition to present his research at the prestigious Falling Walls Conference in Berlin, Germany, later this year. Shin will be among the world’s 100 leading scientists at the November global gathering of forward-thinking individuals from more than 75 countries. His three-minute presentation was titled “Breaking the Walls of Water Treatment.”