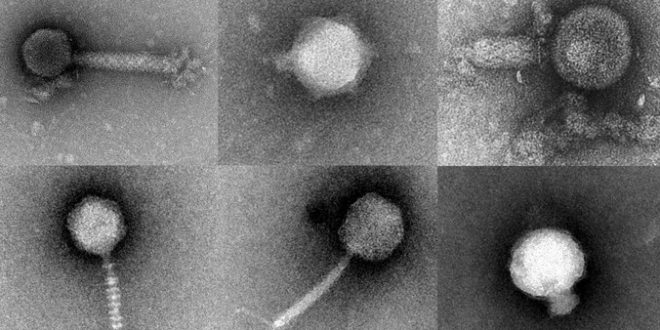 University of Hawaiʻi at Mānoa oceanographers Grieg Steward and Kyle Edwards, as part of a research team from four universities, received a $6 million grant to investigate how the information encoded in the genomes of viruses alters the properties of cells and influences the outcome of viral infections.

The four-year project is supported by the National Science Foundation’s (NSF) Established Program to Stimulate Competitive Research (EPSCoR). This collaboration is among eight projects across the U.S., totaling $41.7 million, that aim to build U.S. research capacity in understanding the relationship in organisms between their genes and their physical characteristics. Uncovering this genotype-to-phenotype relationship holds potential for improved crop yields, better prediction of human disease risk and new drug therapies.

“Over the past several decades, scientists and engineers have made massive strides in decoding, amassing and storing genomic data,” said Denise Barnes, NSF EPSCoR head in a news release. “But understanding how genomics influence phenotype remains one of the more profound challenges in science. These awards lay the groundwork for closing some of the biggest gaps in biological knowledge and developing interdisciplinary teams needed to address the challenges.”

From water and soil to the human gut, single-celled microbes abound and viruses are present right alongside them constantly altering how the microbes interact. The relationship between viruses and microbes is complex and variable. In some cases a virus will infect a microbe, hijack its machinery and begin replicating, eventually killing the host. In other cases, a virus will infect a microbe but, rather than killing it, will fundamentally change how the microbe behaves. Often the change is beneficial for the infected microbe giving it a competitive advantage over other uninfected microbes. How these various processes work within complex microbial communities is still largely a mystery.

“A much more realistic accounting of the nuanced relationships between viruses and microbes is going to be needed if we want to fully understand how the Earth’s microbiome keeps our planet habitable” said Steward.

At UH, Steward and Edwards will focus specifically on viruses infecting marine phytoplankton—microscopic organisms that conduct photosynthesis. Phytoplankton serve as the base of marine and freshwater food chains and produce more than half the oxygen on Earth. Viruses are a major source of mortality for phytoplankton and can dramatically alter how the food generated by photosynthesis is distributed in the marine food web.

Steward and Edwards will investigate a diverse collection of phytoplankton-virus systems that Steward’s group has isolated from waters around Oʻahu.

“These include viruses infecting branches of the tree of life from which viruses had never been isolated, as well as some of the largest known viruses,” said Edwards. “We will also perform laboratory evolution experiments, aiming to unravel the intricate host-virus dynamics that often resemble molecular arms races.”

“A major goal for this project is to move beyond just generating more sequence data and focus on interpretation,” said Steward. “We are awash in environmental sequence data, because it is now cheap and easy to generate, but getting the most value from this resource requires experimental work.”

A nano-lab for observing viruses and cells

To make the experimental work easier, one of the objectives of the multi-university collaboration is to develop and adapt microfluidics technology. Microfluidics will enable the scientists to examine—in a droplet of water smaller than mist—how a single virus and a single microbial cell interact. They aim to make new tools and resources in microfluids technology available to the broader scientific community.

One of the goals of the multi-university collaboration is to develop new technology to enable scientists to examine—in a droplet of water smaller than mist—how a single virus and a single microbial cell interact. They aim to make new tools and resources in microfluids technology available to the broader scientific community.

“Imagine doing a classic microbiology experiment with test tubes and culture plates. Our research would take all of those test tubes and cultures and reduce them down to a tiny droplet 100 times smaller than the diameter of a human hair,” said K. Eric Wommack from the University of Delaware (UD) who will lead the team of marine scientists.

Operating under the principle that oil and water don’t mix, the interdisciplinary team will create devices the size of a microscope slide, equipped with tiny incubation chambers filled with oil, to isolate individual droplets of water injected with a syringe. Molds for these microfluidic devices will be fabricated in UD’s state-of-the-art Nanofabrication Facility for collaborators including Steward and Edwards.

The research team also will create the Viral Informatics Resource for Genome Organization to manage troves of genomic data on viruses and make inferences about how unknown viral populations might behave. Scientists are generating enormous amounts environmental sequence data, but getting the most value from this resource will require experimental work.