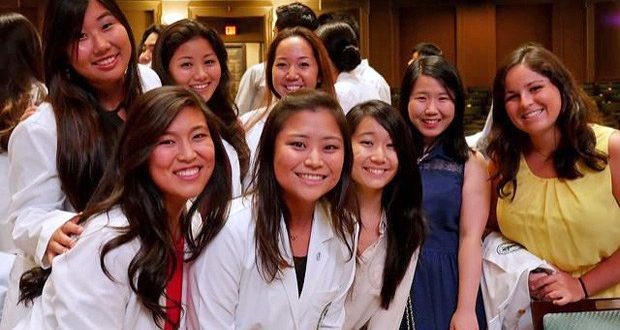 Women in the University of Hawaiʻi at Mānoa’s John A. Burns School of Medicine class of 2019.

The University of Hawaiʻi at Mānoa’s School of Nursing and Dental Hygiene, John A. Burns School of Medicine, William S. Richardson School of Law and College of Education have been ranked by U.S. News and World Report in its just-released 2018 Best Graduate Schools list.

The 2018 edition of the rankings evaluates graduate schools on a variety of factors, including acceptance rates, standardized test scores and grade-point averages of incoming students, and academic experts’ opinions about program excellence.

School of Nursing and Dental Hygiene

The state’s premier nursing school continues to rise in the master’s and Doctor of Nursing Practice (DNP) program rankings. The U.S. News 2018 Best Graduate Schools ranked the nursing master’s program in the top third and the DNP program top fifty nationwide. In January of this year, the U.S. News 2017 Best Online Graduate Nursing Programs ranked UH Mānoa Nursing 61st out of 144 schools. UH Mānoa Nursing is the leader in nursing education and research in Hawaiʻi with outreach to Asia and the Pacific Basin.

John A. Burns School of Medicine

The medical school’s Primary Care Residency Programs placed in the nation’s Top 25, scoring 23rd on the list of medical schools producing the most primary care doctors. These are the front-line physicians in family medicine, internal medicine and pediatrics, where the doctor shortage is most severe. Read more.

The college is listed as 69th of 256 schools in the 2018 U.S. News Best Graduate Schools edition. For more than a decade, the College of Education has been in the top 100 teacher preparation schools and remains at the top for funded research, having been awarded more than $17 million in contracts and grants in 2016. Read more.