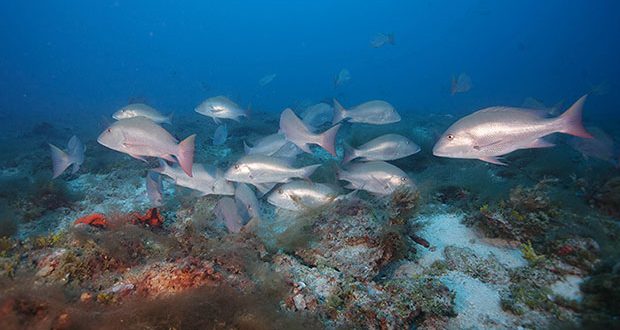 Timing is critical for the snapper and other reef fish that aggregate to spawn each year. Photo credit: National Oceanic and Atmospheric Administration

Timing is critical for the success of some spawning fish

The larvae of some species of reef fish appear to survive better depending on the timing of when they were spawned, according to new research from the University of Hawaiʻi at Mānoa Hawaiʻi Institute of Marine Biology(HIMB) and the National Institute for Mathematical and Biological Synthesis (NIMBioS).

The findings advance earlier research that suggested only spawning location is critical and have important implications for fisheries management and conservation.

Many reef fish form “spawning aggregations,” gathering at highly predictable times and locations to spawn and producing larvae that will spend a month or more free-floating before settling to reef habitat.

Modeling the effect of spawning time

Using a highly realistic biophysical model of ocean currents and larval behavior of snapper developed by co-author Claire Paris of the University of Miami, the researchers traced the movement of snapper larvae from spawning sites in Cuba into the Florida Strait.

They found that larval success depended on the timing of the spawning aggregation. Simulated larvae that were released just before the full moon, when spawning aggregations occur in nature, were more likely to survive than larvae spawned at other times of the lunar month. But the location of spawning was less critical – the researchers found little difference in larval success between the spawning locations observed in nature and the other nearby locations simulated in the model.

The advantage of spawning aggregations

“Reef fishes form these large aggregations not just to find mates, but because the specific time of the aggregation increases the survival of their larvae. Conserving spawning aggregations not only conserves the large reproductive individuals that sustain the population, but, according to our study, ensures the success of their larvae,” said lead author Megan Donahue, associate researcher at HIMB and member of the “Pretty Darn Good Control” Working Group at NIMBioS.