On April 11, scientists returned from a 36-day mapping expedition to Papahānaumokuākea Marine National Monument (PMNM) in the remote Northwestern Hawaiian Islands. The Monument is the largest protected area in the United States, encompassing an area greater than all its national parks combined, yet over half its seafloor has never been mapped in detail due to the limited availability of the advanced sonar systems required. The team mapped over 40,000 square kilometers (15,445 square miles) – an area four times the size of the Big Island – of previously unmapped or poorly mapped areas inside the Monument. This represents approximately 11 percent of the total area of the Monument, and includes 18 seamounts and extensive banks off Pearl and Hermes, Midway and Kure atolls.

“The goal of the expedition was to fill large gaps in seafloor data in order to facilitate future research and discoveries in the region,” says Christopher Kelley, program biologist with the University of Hawaii’s Hawaiʻi Undersea Research Laboratory and chief scientist of the expedition.

Carried out aboard the Schmidt Ocean Institute’s (SOI) 272-foot R/V Falkor, the expedition utilized the ship’s state-of-the-art seafloor mapping sonar systems, among the most advanced mapping technology in the world. Approximately 98 percent of the Monument’s area is deeper than 100 meters (328 feet), where features including seamounts, ridges and submerged banks are home to rare and likely undiscovered species of corals, fish and other animals. Mapping is key to finding these.

“We literally have better maps of the moon than of the ocean floor,” says Randy Kosaki, NOAA’s deputy superintendent for research at the Monument. “These bathymetric data will go along way towards improving our understanding of Papahānaumokuākea’s features. As natural resource managers, we can’t manage what we don’t understand.”

Another objective of this mapping effort is to identify likely sites of deep-sea coral and sponge beds. In 2003, scientists discovered the existence of these beds within the Monument in more than 1,000 meters (approximately 3,280 feet) of water.

“On this trip, we discovered more sites in the Monument with the right type of topography to support these amazing deep sea coral gardens,” Kelley said. “We’ll have to wait until someone gets an opportunity to dive on the sites with a submersible or remotely operated vehicle to confirm they exist.”

Previous exploration of the few known beds led to the discovery of more than 50 new species of sponges and corals, according to Kelley. It is expected that more discoveries will be made as a result of the information gleaned from this trip.

The region’s geology was another key focus of the expedition. Ancient coral reefs that drowned as the earliest Hawaiian Islands subsided now hold a detailed record of that process spanning millions of years. Mapping can offer a big picture view of how various features are organized, which will help researchers better understand Hawaii’s geological history.

“We established SOI in 2009—and led the transformation of Falkor into a state-of-the-art research vessel—to support the world’s leading ocean scientists on their essential, but difficult-to-implement research,” says Wendy Schmidt, who co-founded Schmidt Ocean Institute with her husband Eric. “The mapping and geological work conducted during this cruise and the one that follows will inform the work of Chris Kelley and his team, and through our open sharing approach, all scientists who have a stake in better understanding this region.”

The team consisted of researchers from the University of Hawaiʻi at Mānoa, NOAA’s Pacific Islands Fisheries Science Center, PMNM-NOAA’s Office of National Marine Sanctuaries, Schmidt Ocean Institute, the University of Sydney, and the University of British Columbia. This was the first of two expeditions slated for the spring of 2014; the second will take place May 2-June 6.

For more information about the expedition, visit http://www.schmidtocean.org/story/show/2216. 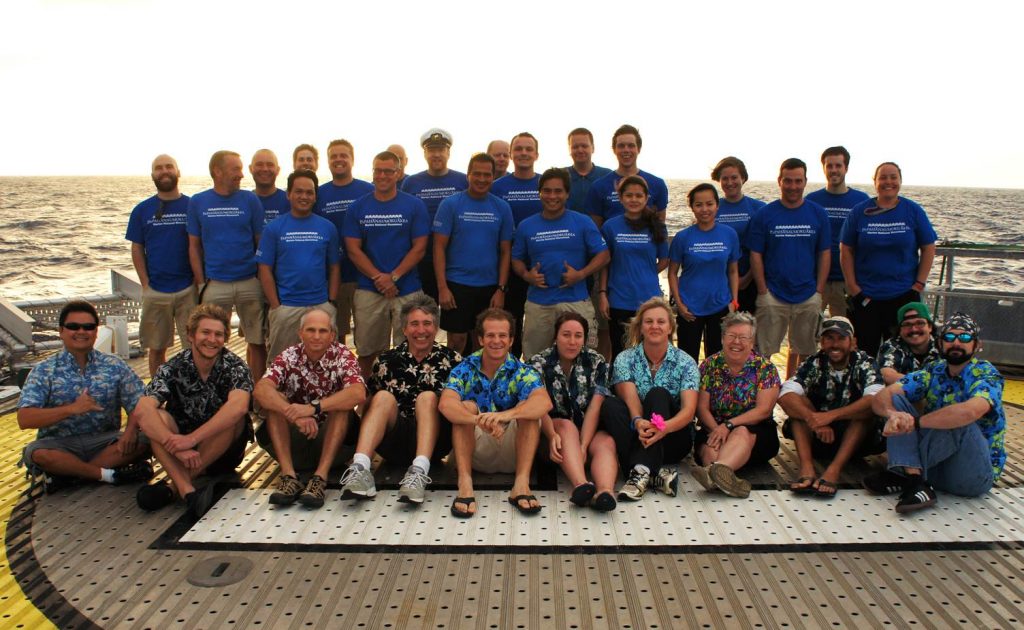 Schmidt Ocean Institute was created by Eric and Wendy Schmidt in 2009 to enable research that expands understanding of the world’s ocean using advanced technology, intelligent observation, and the open sharing of information. Based on a peer review proposal process, the organization invites select scientific
teams from around the world to conduct collaborative research at no cost aboard its 272-foot research
vessel, Falkor, launched in 2012. For more information please visit  www.schmidtocean.org.

The School of Ocean and Earth Science and Technology at the University of Hawai‘i at Mānoa was established by the Board of Regents of the University of Hawai‘i in 1988 in recognition of the need to realign and further strengthen the excellent education and research resources available within the
University. SOEST brings together four academic departments, three research institutes, several federal
cooperative programs, and support facilities of the highest quality in the nation to meet challenges in the
ocean, earth and planetary sciences and technologies. www.soest.hawaii.edu

Papahānaumokuākea is cooperatively managed to ensure ecological integrity and achieve strong, longterm protection and perpetuation of Northwestern Hawaiian Island ecosystems, Native Hawaiian culture, and heritage resources for current and future generations. Three co-trustees – the Department of
Commerce, Department of the Interior, and State of Hawai‘i – joined by the Office of Hawaiian Affairs,
protect this special place. Papahānaumokuākea Marine National Monument was inscribed as the first
mixed (natural and cultural) UNESCO World Heritage Site in the United States in July 2010. For more
information, please visit  www.papahanaumokuakea.gov.