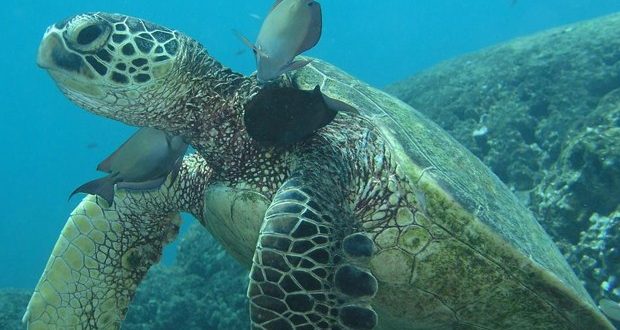 Scientists, including Tina Weatherby with the University of Hawaiʻi at Mānoa School of Ocean and Earth Science and Technology (SOEST), published a study wherein they reconstructed the skin of endangered green turtles, marking the first time that reptile skin was successfully engineered in a laboratory. In turn, the scientists were able to grow a tumor-associated virus to better understand certain tumor diseases.

In an international collaboration led by the U.S. Geological Survey, scientists engineered turtle skin in order to grow a virus called chelonid herpesvirus 5, or ChHV5. ChHV5 is associated with fibropapillomatosis, known as FP, a tumor disease affecting green turtles worldwide but particularly those in Hawaiʻi, Florida and Brazil. FP in turtles causes disfiguring tumors on the skin, eyes and mouth as well as internal tumors. The virus also harms turtles’ immune systems, leading to secondary infections, emaciation and often death.

“Fibropapillomatosis is the most common infectious disease affecting endangered green turtles,” said Thierry Work, a United States Geological Survey (USGS) scientist and the lead author of the study. “Our findings provide a significant advancement in studying FP, and may eventually help scientists better understand other herpes virus-induced tumor diseases, including those of humans.”

Scientists used cells from tumors and normal skin from turtles to reconstruct the complex three-dimensional structure of turtle skin, allowing growth of ChHV5 in the lab. In order to observe virus replication in unprecedented detail, Weatherby, a research associate at the UH Mānoa SOEST Pacific Biosciences Research Center, precisely cut ultrathin slices of the skin to a thickness of about 60–80 nanometers or about one thousandths of the thickness of a hair. Viewing these slices through a transmission electron microscope, the only one of its kind in the state used for biological studies, revealed bizarre systems such as sun-shaped virus replication centers where the viruses form within cells.

Although the existence of ChHV5 has been known for more than 20 years, the inability to grow the virus in the laboratory hampered understanding of how it causes tumors and the development of blood tests to detect the virus.

“Examining viruses within the complex three-dimensional structure of engineered skin is exciting, because virus replication in such a system is likely much closer to reality than traditional laboratory techniques,” Work said. “This method could be a powerful tool for answering broader questions about virus-induced tumors in reptiles and herpes virus replication in general.”

The U.S Endangered Species Act and International Union for the Conservation of Nature list sea turtles as threatened or endangered throughout their range. Aside from disease, threats to green turtles include loss of nesting habitat, nest destruction and bycatch in commercial fisheries.

—This story was modified from the USGS news release.