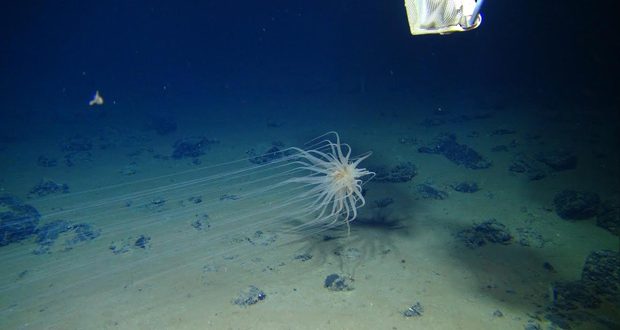 A new species from a new order of Cnidaria collected at 4,100 meters in the Clarion-Clipperton Fracture Zone (CCZ) that lives on sponge stalks attached to nodules. Photo credit: Craig Smith and Diva Amon, ABYSSLINE Project.

Protecting the deep sea: a call for balancing mining and ecosystem sustainability

Thousands of feet below the ocean’s surface lies a hidden world of undiscovered species and unique seabed habitats—as well as a vast untapped store of natural resources including valuable metals and rare-earth minerals. Technology and infrastructure development worldwide is dramatically increasing demand for these resources, which are key components in everything from cars and modern buildings to computers and smartphones. This demand has catalyzed interest in mining huge areas of the deep-sea floor.

In a paper published this week in Science, oceanography professor Craig Smith from the University of Hawaiʻi at Mānoa along with the Center for Ocean Solutions and co-authors from leading institutions around the world propose a strategy for balancing commercial extraction of deep-sea resources with protection of diverse seabed habitats. The paper is intended to inform upcoming discussions by the International Seabed Authority (ISA) and set the groundwork for future deep-sea environmental protection and mining regulations.

Smith led a team of scientists that helped the ISA design Marine Protected Areas (MPA) for the deep sea’s first regional environmental management plan in 2012. Located in an area of the Pacific Ocean known as the Clarion-Clipperton Zone (CCZ), the plan honored existing mining exploration claims while protecting delicate habitats by creating a network of MPAs. The CCZ serves as a model for how future deep-sea ecosystem management could unfold.

“Our purpose is to point out that the ISA has an important opportunity to create networks of no-mining MPAs as part of the regulatory framework they are considering at their July meeting,” says Lisa Wedding, one of the papers’ authors and an early career science fellow at Stanford University. “The establishment of regional MPA networks in the deep-sea would benefit both mining and biodiversity interests by providing more economic certainty and ecosystem sustainability.”

The ISA is charged with managing the seabed and its resources outside of national jurisdictions for the benefit of humankind. According to the United Nations Convention on the Law of the Sea (UNCLOS), the deep seabed is legally a part of the “common heritage of mankind,” meaning that it belongs to each and every human on the planet.

“The ISA is the only body with the legal standing and responsibility to manage mining beyond national borders,” said Kristina Gjerde, an international high-seas lawyer and co-author on the Science paper.

Since 2001, the ISA has granted 26 mining exploration contracts covering more than one million square kilometers of seabed, with 18 of these contracts granted in the last four years. As part of strategic environmental plans to protect deep-seabed habitats and manage mining impacts, researchers recommend that the ISA take a precautionary approach and set up networks of MPAs before additional large claim areas are granted for deep seabed mining.

“Given our paltry understanding of deep-sea environments, regional networks of MPAs that designate significant portions of the deep seabed as off-limits to mining would provide key insurance against unanticipated environmental impacts,” said co-author Steven Gaines, dean of the Bren School of Environmental Science and Management at theUniversity of California, Santa Barbara.

Mining impacts could affect important environmental benefits that the deep sea provides to human beings. For example, the deep-sea is a key player in our planet’s carbon cycle, capturing a substantial amount of human-emitted carbon which impacts both weather and climate. Mining activities could disturb these deep-sea carbon sinks, releasing excess carbon back into the atmosphere. The deep sea also sustains economically important fisheries and harbors microorganisms known as extremophiles, which have proven valuable in a number of pharmaceutical, medical, and industrial applications.

“This kind of precautionary approach achieves a balance of economic interests and conservation benefits,” says Sarah Reiter, a co-author from the Monterey Bay Aquarium’s Science and Conservation Program.

The upcoming ISA session on July 15th represents a critical juncture for defining the future of deep-sea mining and protection.

“The time is now to protect this important part of the planet for current and future generations,” said Larry Crowder, a co-author and science director for the Center for Ocean Solutions at Stanford University. “Decisions that affect us all will be made by the ISA this summer.”

Tags School of Ocean and Earth Science and Technology