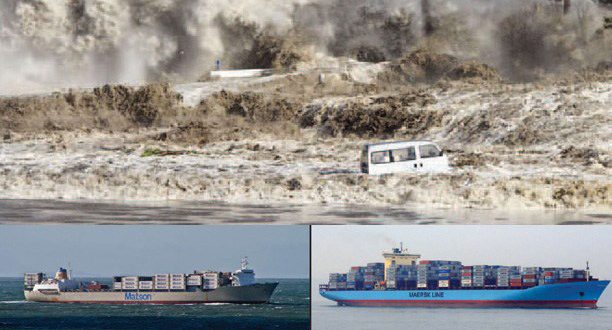 Accurate and rapid detection and assessment of tsunamis in the open ocean is critical for predicting how they will impact distant coastlines, enabling appropriate mitigation efforts. Scientists from the University of Hawaiʻi at Mānoa School of Ocean and Earth Science and Technology (SOEST) are using commercial ships operating in the North Pacific to construct a network of low-cost tsunami sensors to augment existing detection systems.

The researchers, funded by NOAA, are partnering with Matson, Maersk Line and the World Ocean Council to equip 10 ships with real-time geodetic GPS systems and satellite communications. The newly built pilot network of GPS-equipped ships enables each vessel to act as an open-ocean tide gauge. Data from these new tsunami sensors are streamed, via satellite, to a land-based data center where they are processed and analyzed for tsunami signals.

“Matson was an obvious partner for this project due to their long history in Hawaiʻi and shared interest in community safety and coastal hazards,” said James Foster, SOEST associate researcher and lead investigator for the project. “The World Ocean Council’s unique connection within the industry allowed us to bring Maersk Line into the collaboration.”

“The unexpectedly huge 2011 Tohoku, Japan earthquake and the unanticipated type of fault slip which caused the 2012 event at Queen Charlotte Islands, Canada highlighted weaknesses in our understanding of earthquake and tsunami hazards and emphasized the need for more densely-spaced observing capabilities,” said Foster.

Despite the advances in tsunami monitoring and modeling technology over the last decade, there are too few observations of tsunamis to provide sufficiently accurate predictions required for hazard response agencies to be able to make the best possible response to tsunami events. In particular, there are very few sensors in the deep ocean between the tsunami source and the distant coastlines that might be threatened. The sensors that do exist are expensive to build and maintain, so only a limited number are deployed. Gaps in the coverage of the network, as well as routine outages of instruments, limit the ability of the current detection system to accurately assess the hazard posed by each event.

By chance, in 2010, UH Mānoa researchers discovered that the ship-based global navigation satellite systems aboard the UH research vessel Kilo Moana were able to detect and measure the properties of tsunamis in the open ocean, thus paving the way for the current project. Foster and colleagues were running an experiment using geodetic GPS on the R/V Kilo Moana when the tsunami generated by the magnitude 8.8 earthquake in Maule, Chile (February 27, 2010) passed the ship. Analysis of the data proved that the system accurately recorded the tsunami signal.

The researchers are working with the NOAA Tsunami Warning Centers to ensure that the network provides the most useful data products to help them with their predictions. They will be working with their industry collaborators to develop a new version of the shipboard package that can be deployed on a much greater number of ships.

“Our new ship-based detection network is the first step towards the creation of the dense global observing network needed to support the efforts of tsunami warning centers to provide the best possible predictions of tsunami hazard to coastal communities,” said Foster.