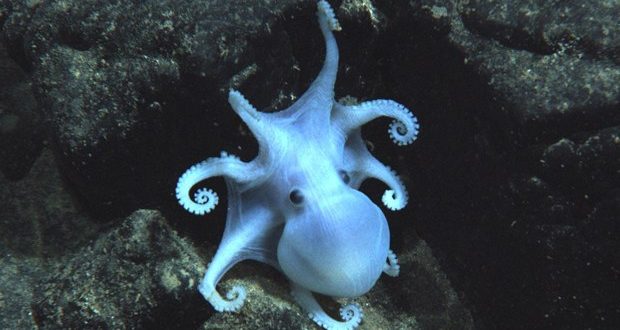 Manganese nodules on the seabed are an important breeding ground for deep-sea octopods in some regions of the Pacific Ocean. As reported by a German-American team of scientists in the journal Current Biology, the octopods deposit their eggs onto sponges that only grow locally on manganese nodules. The researchers observed the previously unknown octopod species during diving expeditions in the Pacific at depths of more than 4000 meters—new record depths for incirrate octopods. Their specific dependence on manganese nodules for brooding eggs shows that the industrial extraction of resources in the deep sea must be preceded by thorough investigations into the ecological consequences of such actions.

In February this year, a nearly transparent deep-sea octopod, dubbed Casper after the famous cartoon ghost, became a social media star within a few days. The National Oceanic and Atmospheric Administration’s (NOAA) Okeanos Explorer deployed the remotely operated vehicle (ROV) Deep Discovery to explore an area off Necker Island in the Northwestern Hawaiian Islands. The ROV detected the approximately ten-centimeter-long marine creature at a depth of 4290 meters, captured close-up video, and live streamed the video.

Blast from the past

Deborah Eason, geology assistant researcher at the UH Mānoa School of Ocean and Earth Science and Technology and co-author on the current study, was tracking that expedition and their discoveries. She immediately recognized the curious creature from an ROV dive in 2011 to explore the submarine portion of Kaʻena Ridge. On that dive, Eason and colleagues were interested in determining whether Kaʻena Ridge was a submarine extension of Waiʻanae Volcano, as had long been assumed, or a separate volcano with its own magmatic system (it is a separate volcano).

“During one of the ROV dives we stopped to collect a rock sample and saw an interesting octopod,” said Eason. “It was sitting on the side of an outcrop right next to our sampling site, and hung out there while we were sampling.”

Eason noted it as an unusual deep-sea critter but, she said, “being a team of geologists, not cephalopod experts, we didn’t realize it was a previously unrecognized species. After seeing Casper in February, I got in touch with Michael Vecchione at NOAA, who confirmed it was almost certainly the same species.”

In 2015, in an unrelated study, researchers of the Alfred Wegener Institute (AWI), the GEOMAR, the Max Planck Institute for Marine Microbiology and the Centre for Marine Environmental Sciences filmed and photographed more specimens of this or similar previously unknown octopod species at a depth of 4120 to 4197 meters in the Peru Basin in the south-eastern Pacific Ocean.

“Until we made these observations, we had assumed that these octopods only occur at depths of up to 2600 meters. But the species discovered can now be seen to colonize at much greater depths,” said lead author Autun Purser of the AWI. “At a depth of 4000 meters, these animals had deposited their eggs onto the stems of dead sponges, which in turn had grown on manganese nodules. The nodules served as the only anchoring point for the sponges on the otherwise very muddy seafloor. This means that without the manganese nodules the sponges would not have been able to live in this spot, and without sponges the octopods would not have found a place to lay their eggs.”

Further, research has shown many deep-sea octopods to only lay very few eggs and have extremely long reproductive cycles. Disturbances during this important period would in all likelihood have serious consequences for the octopod offspring.

An experiment in the Peru Basin from the late 1980s, called the DISCOL experiment, is one of only a handful of studies designed to simulate deep-sea mining and monitor the long-term effects of habitat destruction on the local ecosystem. It shows that many deep-sea animals need manganese nodules in their habitat and even 26 years later many animal populations had not yet recovered.

Putting it all together

Based on the observations of this Hawaiian Casper octopod and 28 additional observations of similar octopods made elsewhere in the Pacific, the newly published study reveals new knowledge about life in the deep sea and the ecological significance of the manganese nodules.

“Our new observations show that we have to know about the behavior of deep-sea animals and the specific way in which they adapt to their habitat in order to draw up sustainable protective and usage concepts,” said AWI researcher Antje Boetius and study co-author.