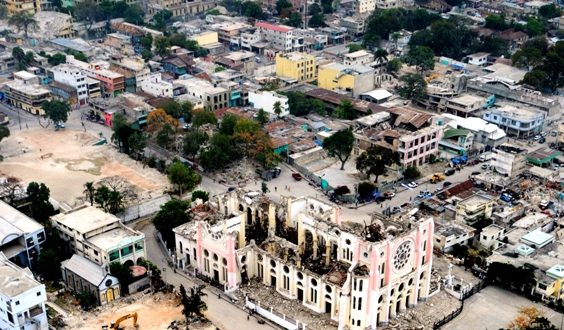 Feb. 27, 2010: An aerial view of Port-au-Prince, Haiti, from an MH-60S Sea Hawk helicopter assigned to the Military Sealift Command hospital ship USNS Comfort (T-AH 20), shows the devastation of the 7.0 earthquake that struck Haiti Jan. 12. Approximately 230,000 Haitians are reported to have died as a result of the earthquake. (U.S. Navy photo by Mass Communication Specialist 2nd Class Chelsea Kennedy/Released)

University of Hawaiʻi at Mānoa Assistant Professor Victoria Fan, Associate Professor Timothy Halliday and Bradley Chen (National Yang-Ming University) investigated infant and child mortality after the 2010 earthquake in Haiti. Their study “The impact of internal displacement on child mortality in post-earthquake Haiti: a difference-in-differences analysis” was published in the International Journal for Equity in Health.

The study found that births from camp households had higher infant mortality and child mortality than those not living in camps. These odds are higher despite better access to food, water, bed net use, mosquito spraying and vaccines among camp households. Efforts are needed to identify vulnerable populations to provide targeted assistance in post-disaster relief.

“The data indicates that those living in camps are getting several key health services, but the services may not be of adequate quality to reduce child mortality,” said Fan. “We also found that those who did not or could not move, either to camps or elsewhere, are quite vulnerable as well. These populations are the literally ‘left behind.’”

“In carrying out disaster relief, providing a lot of materials and supplies to camps is not sufficient,” said Chen. “Despite better access to food, water and vaccines, kids in camps are still having worse health than other migrant and displaced households. Those reasons need to be better understood.”