University of Hawaiʻi at Mānoa School of Architecture graduate Joey Valenti aims to solve several problems at once with his sustainable award-winning Doctor of Architecture project.

Entitled “Rescaling Urbanism,” the winner of a $10,000 UH President’s Green Project Implementation Award aims to create a self described alternative framework for construction and housing, as demonstrated through his first scale model home.

“I guess my idea was coalescing ideas of more contemporary ways of designing, of builiding, and ultimately fabricating structures right here locally in Hawaiʻi,” says Valenti.

The project addresses sustainability in multiple ways, including the proposed use of invasive Albizia wood to build the structures.

“I think there’s an edge with this idea in the fact that the invasive Albizia is a statewide issue or crisis that we’re dealing with,” says Valenti. “The state is having to put forward a lot of money to remove this material, but you don’t really see it going anywhere.”

Valenti’s project is also sustainable because of its lower cost design, including non-traditional windows and doorways, and its proposed use as easy-to- build transitional housing to address Hawaiʻi’s housing crisis.

”It questions all the issues we are facing with environmental change and social inequality and how we’re having this huge housing crisis that’s not going anywhere but up,” Valenti says.

He hopes to have a full-scale model built by the end of the year to truly prove his concept. 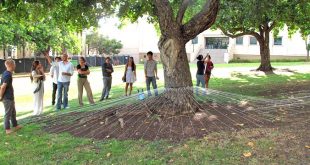 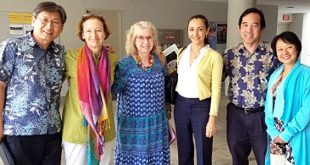 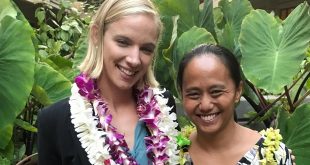