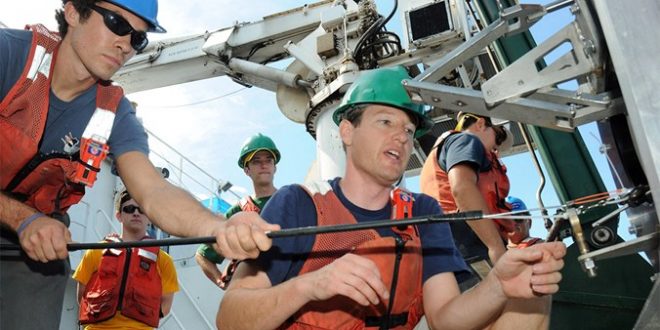 The deepest 45 percent of the ocean depth range remains one of the most unexplored and inaccessible regions on the planet. Twelve people have walked on the moon while only three people have ever been to the deepest zone in the ocean—the hadal zone. Armed with a $1.2 million award from the W.M. Keck Foundation, a team from the University of Hawaiʻi at Mānoa, along with industry partners, is on track to build a Hadal Water Column Profiler (HWCP).

The hadal zone, waters deeper than 3.75 miles, covers an area larger than the size of Texas and has pressures approaching 1,100 times atmospheric pressure, at the deepest point (16,000 psi, which is equivalent to having two rhinoceros on your thumb). Very little is known about the circulation, mixing, chemical properties and biological communities in the water of these deep ocean trenches.

Twelve people have walked on the moon while only three people have ever been to the deepest zone in the ocean—the hadal zone.

This dearth of knowledge stems from a lack of suitable instrumentation with which to make observations.

HWCP, which is a uniquely capable profiling instrument will, for the first time:

Research possible thanks to HWCP will create new understanding of the deep ocean’s impact on the climate and biological communities.

“HWCP will open up new, exciting and potentially transformative avenues of research with global impact,” said David Lassner, UH president and interim UH Mānoa chancellor. “This is a powerful example of how private support is helping propel globally relevant, leading edge UH research. We are most grateful to the W.M. Keck Foundation for the funding necessary to explore exciting new frontiers.”

This three-year project will involve a highly qualified team of scientists, engineers and technicians from the School of Ocean and Earth Science and Technologyand industry.

The industry partners include Rockland Scientific Inc. which will provide a custom turbulence sensor payload, and Ron Allum Deepsea Services which will provide the flotation, pressure tolerant batteries and design consulting. Ron Allum was lead engineer and co-designer of the Deepsea Challenger, which took James Cameron to the Challenger Deep in the Marianas Trench in 2012.