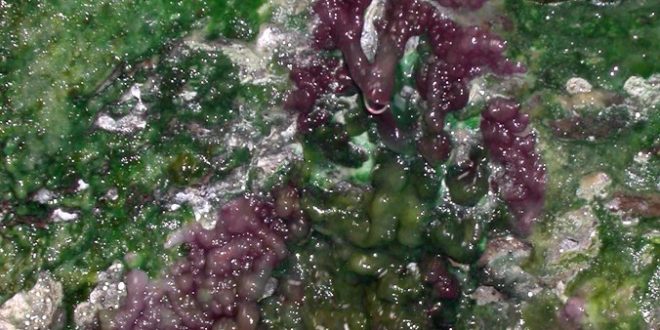 Green and purple biofilms hang from the walls of lava caves near Kīlauea caldera on Hawaiʻi Island. These, and other biofilms, may be similar to microbial life on early Earth and possibly an early Mars environment.

Rebecca Prescott, a University of Hawaiʻi at Mānoamicrobiology student who recently received her PhD, has won a prestigious National Science Foundation Postdoctoral Fellowship award for her project, “Survival in extreme environments through cooperation: biofilms and looking for life on Mars,” under the program Broadening Participation of Groups Underrepresented in Biology.

“We are interested in how cooperative behavior, through chemical communication in bacteria, may help microbes survive in extreme environments that are representative of early Earth and early Mars,” said Prescott.

Is cooperation key to survival in harsh places, like Mars?

In the field of astrobiology, determining the range of planetary conditions that are favorable for life, detecting life on other planets and understanding how life evolved on Earth are all important questions, and further exploration of the Universe. To address these questions, Prescott is focusing on how biofilms from hypersaline ponds in San Salvador Island in the Bahamas and lava caves on Hawaiʻi Island may survive through cooperative behavior and chemical communication, referred to as quorum sensing.

Prescott is working at the University of Edinburgh, using the Planetary Environmental Liquid Simulator, to evaluate the genomic changes of hypersaline biofilm mats from the Bahamas and Hawaiian lava caves when placed in early Mars and early Earth conditions. She is also evaluating whether molecules used by bacteria to communicate may be preserved in rocks for long periods of time, which will help find new ways to detect life on other planets.

“To help us understand where microbial life may occur on Mars or other planets, past or present, we must understand how microbial communities evolve and function in extreme environments as a group, rather than single species,” said Prescott. “Quorum sensing gives us a peek into the interactive world of bacteria and how cooperation may be key to survival in harsh environments.”

Quorum sensing has not been investigated in the field of astrobiology, so this study will be the first to illuminate how microbial interactions might influence survival in early Mars and early Earth conditions.

Her fellowship is funded by the National Science Foundation’s Division of Biological Infrastructure and the Tribal Colleges and Universities Program. Prescott worked under the guidance of Stuart Donachie, microbiology associate professor and committee chair, while working on her PhD at UH.

Prescott is conducting research and training that is increasing the participation of groups underrepresented in biology under the mentorship of two sponsoring scientists: Alan Decho, University of South Carolina, and Charles Cockell, University of Edinburgh. The questions of how life evolved on Earth are imbedded in cultural traditions across the globe, and the highly interdisciplinary field of astrobiology provides unique opportunities to develop and integrate indigenous cultural perspectives into K–12 classrooms.

Prescott also works with the UK Centre for Astrobiology Summer Teacher Academy, and with science teachers in Hawaiʻi and the Carolinas, Eastern Band of Cherokee Indians, to develop teacher training workshops in culture-based science of astrobiology and genomic data science.