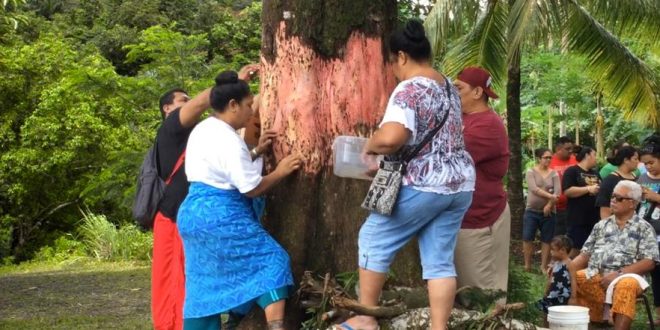 The COE team was among 251 attendees from 47 different countries. Their paper was selected out of 687 submitted. Their combined research focuses on embracing place-based pedagogy through cultural traditions in order to increase student engagement and promote community. The presentation illustrates how, rather than adhering to mandated instruction or imported standards and assessment, culturally-responsive instruction empowers students intellectually, socially, emotionally, and politically, leading to more meaningful and effective learning.

Education New Development is filled with examples of science, math, and literacy lessons, rooted in place and culture. One project entails extracting dye and harvesting bark from trees to create Sāmoan Siapo, or tapa cloths. Another uses folk tales as writing assignments. Wayfinding is also used, highlighting the internationally known Mālama Honua Worldwide Voyage, as a science lesson which connects the past, present, and future through culture and education.

“The majority of our teacher candidates in American Sāmoa had never learned traditional crafts like Siapo-making or basket weaving, so it was rewarding to merge Common Core mathematics and science academic content with rich cultural lessons,” said lead author and presenter, Zuercher. “The candidates’ respect for the elders who led the cultural lessons deepened as they made new connections between the wisdom from their past and current academic standards.”

The COE team found that, as a result of participating in place-based pedagogy, their teacher candidates were highly engaged in their learning, gained a deeper understanding of their cultural traditions, became more involved with the local community, felt more confident in their abilities, and submitted work of higher quality.