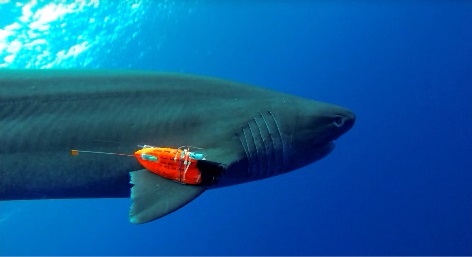 A sixgill shark with a combined sensor and video recorder attached to it swims through the ocean.

Scientists from the University of Hawaiʻi at Mānoa and University of Tokyo revealed that two species of deep-sea sharks, sixgill and prickly sharks, are positively buoyant—they have to work harder to swim downward than up and they can glide uphill for minutes at a time without using their tails. Their results were published in a recent study,“Unexpected Positive Buoyancy in Deep Sea Sharks, Hexanchus griseus and a Echinorhinus cookei.”

Conventional wisdom suggests that sharks are negatively, or occasionally neutrally, buoyant. Sharks have cartilaginous skeletons, which are lower in density than bone, and they generate buoyancy via their large, oil-filled liver. Despite these adaptations, most sharks are negatively buoyant and will sink if they stop swimming. These sharks generate lift by swimming forward. It was previously thought that some deep-sea sharks might be neutrally buoyant to save energy in their austere environment.

“We didn’t expect to find evidence of positive buoyancy, and ran two sets of experiments to confirm our initial observations of this phenomenon. This finding was a total surprise,” said Carl Meyer, assistant researcher at UH Mānoa’s Hawaiʻi Institute of Marine Biology and co-author of the study.

The advantage of buoyancy

Meyer and colleagues fitted sharks with an accelerometer data logger to measure the animals’ swimming performance as they swam up and down in their deep-sea habitat. This device is like a flight data recorder for sharks, providing information about the shark’s swim speed, heading, tail beat frequency and body orientation. From this information, the researchers were able to determine whether the sharks were positively, negatively or neutrally buoyant.

These sharks live deeper by day than by night, and the cold water in their daytime habitat may cool their swimming muscles making them sluggish swimmers. Positive buoyancy may be a physiological strategy enabling these sharks to exploit deep, cold habitats with limited food resources.

To provide additional insight into the habitats used by deep-sea sharks, the researchers deployed the first ever shark-mounted camera on a deep-sea shark.

“When I first downloaded the camera, I thought it had failed because all I saw were thousands of completely black frames,” said Meyer. “Suddenly a string of images appeared with a brightly-lit, alien-looking reef and strange deep-sea invertebrates. I was elated and realized that the black frames resulted from the shark swimming around too high in the water column for the camera strobe to illuminate the seabed.”

“We want to better understand why these sharks are positively buoyant,” said Meyer. “Does this trait perhaps give them a “stealth’ advantage during hunting, allowing them to glide motionless upward to capture prey above them in the water? Or does it help them with nightly migrations to shallower areas?”

With future studies, Meyer and colleagues hope to answer these questions by measuring the sharks’ muscle temperatures during their vertical migrations and by fitting them with cameras in hopes of capturing on film active feeding.