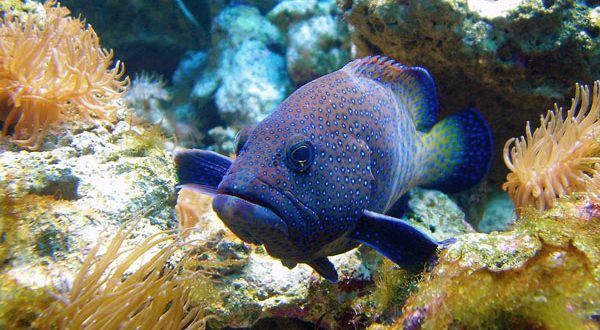 The peacock grouper, Cephalopholis argus. By Wisniowy, via Wikimedia Commons.

Beyond the ‘Roi Roundup’

What if you could remove all of the roi?

UH Mānoa graduate student Jonatha Giddens has been investigating this possibility at a reef off Puako Bay, on the west side of the Big Island of Hawai‘i.

For Giddens, who is working with Dr. Alan Friedlander in the Fisheries Ecology Research Lab, the peacock grouper, commonly known as roi, presents a special kind of problem.  Roi was intentionally introduced to Hawai‘i from French Polynesia in the 1950s as a potential food fish.  But ever since it was linked to ciguatera—a type of food poisoning that causes nausea, vomiting and neurologic symptoms—roi has been off the menu for most Hawai‘i households.

The roi is an attractive fish. Chocolate brown with royal blue and purple borders on their fins and tails, roi are speckled with hundreds of tiny iridescent blue “eyes” that conjure up the tail decorations of their avian namesake. Adults can reach up to two feet in length.

Roi are aggressive predators that consume other reef fish.  But while no-one doubts the roi’s dominating presence in Hawaii, there have been no scientific studies designed to evaluate their true impact on local reefs.

Instead, fishermen have taken control measures into their own hands, organizing regular “Roi Roundup” spearfishing tournament events, specifically targeting a so-called “junk” fish that they see as a threat to native – and safely edible – reef denizens.

“Fishers go out and remove as many roi as possible, to get them off the reefs,” Giddens said.  “But there’s also a tension because the fishers are calling for management actions from resource managers. And up until now there hasn’t been any experimental evidence.  We don’t really know the effects of roi on the native species in Hawai‘i.”

To help fill this knowledge gap, Giddens has joined up with a team conducting a long-term monitoring study to evaluate the health of a 3-acre reef section where roi were removed a few years ago.  In collaboration with The Nature Conservancy through the Michael Morriss Memorial Fund, and with support from NOAA’s Community-based Restoration Program, she is trying to determine if native species will rebound on a roi-free reef.  In January 2014, Giddens presented the interim results at the Gordon Research Conference on Predator-Prey Interactions in Ventura, CA.

Truly understanding the changes to native reef fish in a roi-free ocean will take time: at least five years of repeated monitoring of the impact and control reefs. So far, three years of monitoring have shown that total fish biomass peaks during the winter surveys and declines during the summer surveys.  This strong seasonal pattern shows up at all study sites.

The effects of previous roi predation were observed 18 months post-removal, during the winter survey, when fish biomass peaked at all study sites. However, this effect faded during the summer survey (24 months post-removal), when fish populations declined once again. The densities of both competitor and selected prey species followed this same seasonal pattern. Giddens and The Nature Conservancy marine team will continue monitoring the fish assemblage for the next year, and longer if funding permits, in order to determine the true long-term effect of roi removal.

For the second half of her PhD research, Giddens would like to investigate the social side of the roi control story by engaging with the spearfishing community.

“For my dissertation, I would like to look at the social side and conduct interviews with the roi fishers to try to understand their perspective and knowledge,” Giddens said.  By participating in the spearfishers’ organized roundup events, Giddens hopes to collect data on the size of fish caught and the amount of effort exerted for the catches—all of which is valuable from a fisheries management perspective.  She would also like to understand what helps motivate the participants in these popular volunteer efforts.

“A lot of the zoology or straight ecology studies really concentrate on the negative impacts of humans on the reef,” Giddens said. “But the social-ecological studies that I’ve seen really can focus on where communities come together to effectively manage the resource.  You get some success stories that are so inspiring.  So, that’s where I’d like to go — to focus on the successes, and to try to make them happen more and more.”

Share
Previous Predicting crop outcomes in a changing climate
Next Woven words: Reflections on my time at UH Manoa