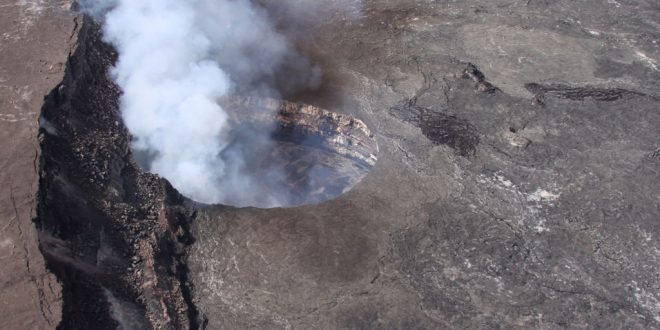 Award examines volcanic crises in the USA: from precursors to resilience

The University of Hawaiʻi at Mānoa School of Ocean and Earth Science and Technology (SOEST) has been awarded one of the first grants in a new large-scale research direction by the U.S. National Science Foundation (NSF). The grant is one of several made this month by NSF seeking to mitigate disasters by creating broad, interdisciplinary, multi-institutional teams of individuals that often have not worked together previously.

Starting this month, Bruce Houghton, the Gordon Macdonald Professor of Volcanology in Geology and Geophysics, and a team of researchers will start work on an innovative project to improve our “working relationship” with potentially dangerous active volcanoes in the United States. He is joined by Peter Mouginis-Mark, the outgoing Director of Hawaii Institute of Geophysics and Planetology, and Karl Kim, Executive Director of the National Disaster Preparedness Training Center. This study will be made with seven other institutions: the U.S. Geological Survey, UC Berkeley, Texas A&M, Duke, Eastern Tennessee State, Marquette and University at Buffalo, led by the University of Hawaiʻi at Mānoa. This prototype project will begin a new, uniquely large collaboration between researchers within five observatories of the Volcanic Hazards Program of the U.S. Geological Survey and the seven academic institutions. It will also initiate multiple partnerships with State Government, the National Disaster Preparedness Training Center, Domestic Preparedness Consortium and FEMA.

Hazard science has become its own discipline in the 21st century, requiring insights and inputs from social and physical sciences, engineering, mathematics and statistics, land-use planning and computer science. Moderate to large volcanic eruptions, like Mount St. Helens in 1980-1986 or Kīlauea from January 1983 onwards are infrequent, but high-consequence, natural hazard events. Amongst large geological hazards, large eruptions are almost unique in being preceded by weeks or months of clearly recognizable precursors, which offer the potential for successful early interventions. The impacts of volcanic eruptions should be, for this reason, amongst the easiest to mitigate of all the great natural hazards. Nevertheless, the costs of volcanic disasters are often out of proportion to the size of the parent eruptions. Volcanic crises carry a host of volcanological, engineering, human, planning, and economic problems, often because of very high levels of uncertainty in all types of data. The uncertainties in how the volcano, the community, and decision-making institutions will behave can turn events into crises and sometimes disasters. By creating an interdisciplinary group of experts in eruption studies, disaster psychology and emergency management, and quantification of uncertainty, the UH team hopes to start changing that.