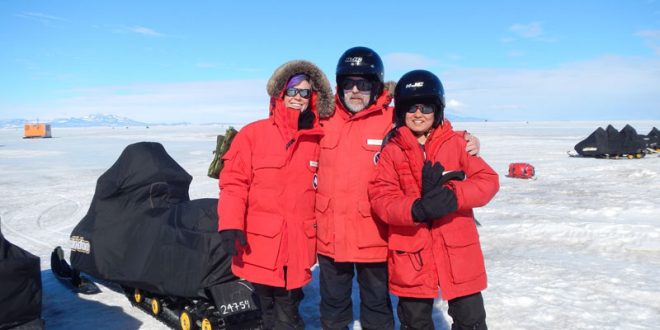 Manavi Jadhav, a postdoctoral scholar in the Hawai’i Institute of Geophysics and Planetology, is one of eight meteorite hunters who has recently landed at McMurdo Station, Antarctica, for the 2013/2014 Antarctic Search for Meteorites (ANSMET) mission.

Writing in the team’s blog on December 6, Jadhav had this to say about their first day at McMurdo:

Today was a hectic but extremely productive day. After ski doo training for the whole group, Alex, Morgan, and I went off for newbie ski doo driving school. We had way too much fun and the guy in charge had to practically drag us off our ski doos after we were done. Can’t wait to get out in the field and ride those things around every single day!

Jadhav is a cosmochemist whose research interests include presolar grains and their stellar sources, isotope cosmochemistry and stellar nucleosynthesis.   Participating in the ANSMET mission has been a long-term goal for her:  Jadhav has applied to be part of ANSMET every year for the last 6 years, and this year was finally selected.

Meet the entire 2013-2014 ANSMET field team here.  The scientists on this year’s team conduct a wide variety of planetary research, from studies of Antarctic (and non-Antarctic) meteorites, the history of the Moon and Mars, processes on icy planetary bodies, to the origins of the solar system.  The team will look for meteorites in the Miller Range of the Transantarctic Mountains from December 2013 to mid-January 2014.

The Antarctic Search for Meteorites program (ANSMET) is a US-led field-based science project that recovers meteorite specimens from Antarctica.  Since 1976 we have recovered more than 20,000 specimens from meteorite stranding surfaces along the Transantarctic Mountains. These specimens are a reliable, continuous source of new, non-microscopic extraterrestrial material  and  support thousands of scientists from around the globs as they seek essential “ground-truth” concerning the materials that make up the asteroids, planets and other bodies of our solar system.  The study of ANSMET meteorites has greatly extended our knowledge of the materials and conditions in the primeval nebula from which our solar system was born, revealed the complex and exotic geologic nature of asteroids, and proved, against the conventional wisdom, that some specimens represent planetary materials, delivered to us from the Moon and Mars, free of charge.