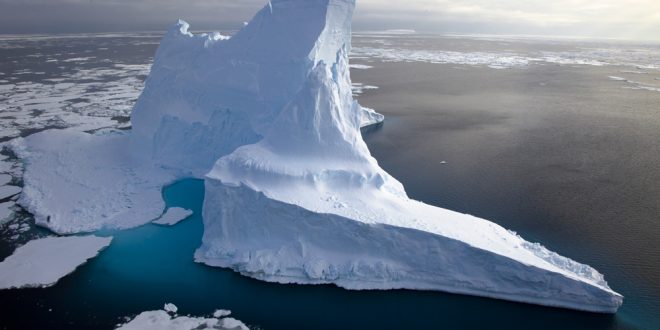 The first evidence for massive and abrupt iceberg calving in Antarctica, dating back 19,000 to 9,000 years ago, has now been documented by an international team of geologists and climate scientists. Their findings are based on analysis of new, long deep sea sediment cores extracted from the region between the Falkland Islands and the Antarctic Peninsula. The study in the May 28, 2014 issue of Nature bears witness to an unstable Antarctic ice sheet that can abruptly reorganize Southern Hemisphere climate and cause rapid global sea level rise.

“One of the iceberg events in our data that is of particular interest took place 14,600 years ago and coincided with a huge ice-sheet melt, the famous Meltwater Pulse 1A, which according to previous studies led to a global sea level rise of about 4 meters within 100 years,” says lead author of the study, Michael Weber at the University of Cologne in Germany.

To determine what brought about such huge ice-sheet collapses in Antarctica, the team conducted a series of climate modeling experiments.

“An unusually strong flow of warm water towards Antarctica may have triggered these events. Our model experiments reveal further that the associated melting in turn increased the warm water flow, thus providing a positive feedback. This is a perfect recipe for rapid sea level rise,” explains co-author Axel Timmermann, professor at the International Pacific Research Center of the University of Hawai’i.

The new findings document that the Antarctic ice-sheet underwent rapid changes in an otherwise gradual transition from glacial to interglacial times in the Southern Hemisphere.

“Our paleo data of abrupt ice-sheet instabilities provide an important benchmark against which future projections of human-induced changes in Antarctic ice volume and global sea level can be evaluated,” says Gerrit Lohmann, professor at the Alfred Wegener Institute, Bremerhaven, Germany.

Funding and Acknowledgements
This study was supported by the Deutsche Forschungsgemeinschaft (DFG grant numbers We2039/7-1, Ri525/17-1 and Ku683/ 9-1), the University of Cologne, the US NSF Antarctic Glaciology Program (grant numbers ANT-1043517 and ANT-1341311), the US NSF Paleoclimatology Program, the Japan Agency for Marine-Earth Science and Technology, and Helmholtz funding through the Polar Regions and Coasts in the changing Earth System (PACES) program. Our study was also part of the Southern Ocean Initiative of the International Marine Past Global Change Study (IMAGES) program.

About IPRC
The International Pacific Research Center (IPRC) of the School of Ocean and Earth Science and Technology (SOEST) at the University of Hawai’i at Mānoa, is a climate research center founded to gain greater understanding of the climate system and the nature and causes of climate variation in the Asia Pacific region and how global climate changes may affect the region. Established under the “U.S. Japan Common Agenda for Cooperation in Global Perspective” in October 1997, the IPRC is a collaborative effort between agencies in Japan and the United States.