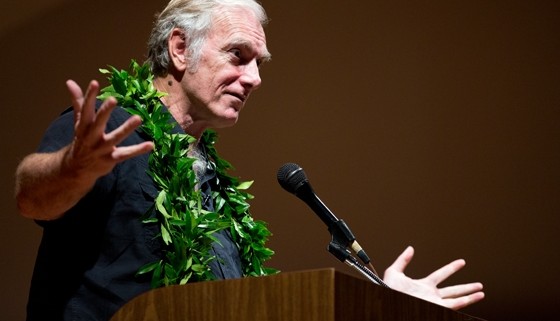 Before John Sayles’s public lecture, the “Godfather of the independent film movement” mingled with donors, and UH faculty and friends at small reception held in the Ethnomusicology Courtyard.

UH Mānoa Chancellor Tom Apple, Dean of the College of Arts & Humanities Peter Arnade and Associate Dean College of Arts & Humanities Tom Brislin highlighted Sayles’s many creative achievements, and thanked donors for their role in helping bring individuals of the highest caliber to our community to share their expertise, through endowments like the Dan and Maggie Inouye Distinguished Chair in Democratic Ideals.

Sayles is an award-winning director, writer, actor and author. He is credited with writing and editing most of his projects, including his latest film, Go For Sisters, and his recent historical novel, A Moment In The Sun. Sayles supports his directing career as a “writer for hire” in Hollywood. His book Thinking In Pictures: The Making Of The Movie Matewan, is still taught in film classes. He wrote and directed several films that have been nominated for Academy Awards, including Lone Star and Passion Fish. Sayles also directed three music videos for Bruce Springsteen’s Born in the USA, I’m on Fire, and Glory Days.

The Dan & Maggie Inouye Distinguished Chair in Democratic Ideals at UH Mānoa engages scholars and public figures dedicated to sharing their knowledge and life experiences. With an emphasis on democratic processes and the importance of public life, the Chair enhances understanding of the unique context of Hawaiʻi, Asia and the Pacific within the traditional positions of power and influence in the U.S.

Renowned economist will address what’s at stake in presidential elect...

Public invited to ‘A Conversation with W.S. Merwin’
Scroll to top