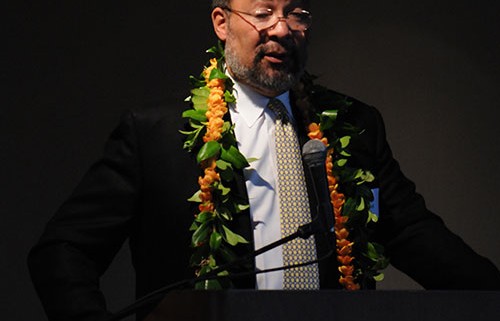 What becomes of a 16-year-old from New York who attends the University of Hawaiʻi and leaves in 1968? In the case of Richard Parsons, he attained positions of increasing responsibility, becoming Chairman and CEO of Time Warner from 2002-2008, and then serving on President Obama’s economic transition team, before accepting the position of Chairman of the Board of Citigroup Inc.

In April 2009, Richard Parsons returned to the UH Mānoa campus, this time as the Dan and Maggie Inouye Chair in Democratic Ideals. This Chair, held jointly in the William S. Richardson School of Law and the Department of American Studies, engages scholars and public figures dedicated to sharing their knowledge and experiences.

During his campus stay, Parsons met with students and faculty and presented a public lecture entitled “The Global Financial Crisis: Origins and Solutions” to an overflow crowd at Kennedy Theatre. Donors, including special guests Senator Inouye and his wife Irene Hirano, also enjoyed meeting the Parsons.

Mr. Parsons and his wife Laura met some of the students who have received the Laura Parsons Endowed Scholarship at UH Mānoa, and shared UH stories over lunch.

Public invited to ‘A Conversation with W.S. Merwin’