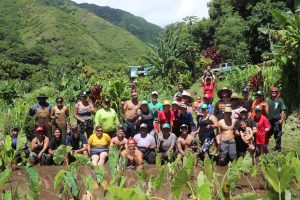 Mauiakama, lead by Dr. Katrina-Ann Kapāʻanaokalāokeola Nākoa Oliveira, is a Hawaiian language immersion place-based summerprogram co-organized by Hawaiian Language faculty from the Mānoa and Maui College campuses of the University of Mauiakama consists of two distinct components for which participants may receive up to six upper division university Hawaiian language credits.

The first component, worth three university credits, is a week of coursework at the University of Hawaiʻi at Mānoa on the island of Oʻahu. Participants engage in various traditional Hawaiian farming practices including planting, cultivating, and harvesting taro—the staple of the traditional Hawaiian diet. Participants also learn to identify and classify more than 30 varieties of taro. For their culminating activity, participants carve their own poi boards out of wood and poi pounders out of stone. 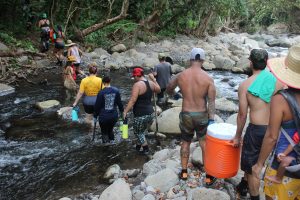 The second component of the program, worth an additional three university credits, is the weeklong Hawaiian immersion camp on the island of Maui. All participants reside together with expert Hawaiian cultural practitioners and native speakers of Hawaiian for the duration of the week at various locations on Maui. At each of the three campsites, participants are taught about the history and significance of the places visited. Participants also engage in hands-on land management practices such as restoring traditional wetland loʻi (ponded taro gardens),cleaning and maintaining ancient irrigation ditches, clearinginvasive plants, and rebuilding traditional fishpond walls. In transit between campsites, participants listen to recordings of native speakers related to the history of the places visited andthe cultural practices that those places are known for.