Ka Papa Loʻi ʻo Kānewai, with the Kamehameha Schools’ ‘Āina ‘Ulu program, operates this site in Punalu’u, within the Ko’olauloa district of O’ahu. This loʻi, covering approximately three acres, provides an alternative site for people to visit and helps to maintain a sustainable level of use at Ka Papa Lo’i O Kānewai. Since working with Kamehameha Schools ʻĀina ʻUlu program to open the loʻi in the early 2000s, we been able to work more closely with the Koʻolauloa district community and Kamehameha Schools programs, and increased its production of Hawaiian

varieties of kalo.  Ka Papa Loʻi ʻo Punaluʻu services over 3,000 people a year.  Programs that frequent the site are the Papa Mahiʻai and Hawaiian Language classes from the University of Hawaiʻi at Mānoa, Kamehameha Summer Enrichment programs such as HoʻomākaʻikaʻI, Hoʻolauna, and Kūlia I ka Pono, along with numerous school groups from across Oʻahu.  All of these stem from our relationship as Hawaiians or people in appreciation of the Hawaiian culture and its origin stories.

The first four lines of this mele set the boundaries of beautiful Punaluʻu. From Puʻu Pauao, at the furthest and highest most point of the Punaluʻu ahupuaʻa, to Makaliʻi on the Southern side.  Māliko in this case describes the northern side of Punaluʻu, there are some discrepancies if Māliko is on southern side. There are four stories that we focus on at Ka Papa Loʻi ʻo Punaluʻu that we have come across in our research and when talking to different kupuna in the area.

The first two stories talks of Kāneloa (also known as Kanaloa), there are renditions of this same story that say that is both Kāne and Kanaloa, who came to Kahana Valley, he/they was/were evidently of unusual proportions, for with one foot placed on Puu o Mahie (in Kahana Valley), he stepped with the other to Punaluu Point.  Then,  over the ridge, he could see two men planting taro up Punaluu Valley. The ridge he/they looked from into Punaluʻu became known as Puʻu Piʻei.  Kneeling on the Kahana side of the ridge, where his knee prints are still to be seen, he watched the two men at work.  It annoyed him that they planted their taro in uneven rows, so he said, ‘Your rows of taro are not straight.’  The men heard the voice but could see no one.  Kaneloa repeated this statement several times, yet the men were never able  to see the speaker.  Soon Kaneloa grew tired of this teasing and went to Kūkaʻiole pool further up in Punaluu Valley and drank of the waters.  Near the pool there grew awa, which the rats were fond of chewing.  It made them giddy and dizzy and they fell into the water, for which reason the pond was given its name, Kūkaʻiole.

The next story is about Kamapuaʻa the mischievous pig demigod. Kamapuaʻa lived in Kaliuwaʻa which is a few valleys to the North of Punaluʻu, where he grew kalo along with his brothers.  But Kamapuaʻa puaʻa was known to frequent the area on his adventures to steal the chickens of the King Olopana in each of the ahupuaʻaʻs from Kapaka to Punaluʻu.

Kekuaokalani was the son of Kealiʻimaikaʻi and Kiʻilaweau.  Kealiʻimaikaʻi was the brother of Kamehameha Paiea and his son, Kekuaokalani, was prophesied to be the next great ruler after Kamehameha. Like Kamehameha was taken from the royal courts in Waipiʻo, Kekuaokalani was taken from Hawaiʻi island and brought to Punaluʻu on Oʻahu by his kahu Kahonu fro protection. When the fleet arrived off the breakers at Punaluu, it was evident to the people on the shore that Punaluu was the goal, Kahonu being well acquainted with his  birthplace.  The canoes entered the harbor and chose Makaiwa as the landing place. Kahonu and his wife took young Kekuaokalani to the densest part of the forest in the  deep solitude of the mountain uplands, to Kawaiakane and Kawaiakanaloa, where the prince was nurtured.  Some say this place is still in existence.  The priests, courtiers and  traveling companions of the young prince were directed by Kahonu to remain at  Maliko to erect a house for the prince, and to repair the heiau of Kaumakaulaula.  Kamakaulaula was said to be named after the pigs of the area whose eyes would turn red on certain akua nights.

Moaʻe is the wind and Kīkēhala is the rain that is known to frequent the Punaluʻu area.

This last portions speaks on multiple levels to different audiences.   Punaluʻu for educational purposes, the mele refers to the new focus that the Kamehameha Schools has incorporated into its land management plan.  It refers to Punaluʻu being a land of Potential.  All 4,215 acres can and should be utilized for educational purposes (mist is a symbol for education).  The stories references send an invitation to come see and learn, come visit and experience, come have fun, but remember the kuleana that comes with it.  Indeed Kamehameha Schools is seeing a new dawn of enlightenment. Kamehameha Schools is experiencing a Hawaiian renaissance of its own.  So, arise to the occasion, participate, and become enlightened by taking hold of, and fulfilling your kuleana to our beloved ʻāīna of our aliʻi. Find more information by clicking Get Involved. 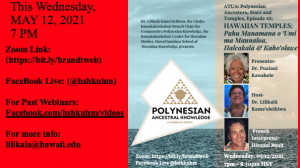