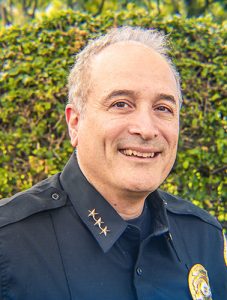 Chief Black brings more than 30 years of public service experience, including four years as a state prosecutor and 27 years as a federal agent. He has held supervisory positions within the Federal Bureau of Investigation (FBI) for 14 years, overseeing hundreds of employees and managing multimillion-dollar programs. Chief Black has also taught graduate level courses in criminal justice over the past seven years.

Chief Black began his career as an Assistant State’s Attorney in Chicago, Illinois, and was recruited to join the FBI after assisting in a high profile investigation. Upon relocating to San Francisco, he served as a legal instructor, cyber investigator, training coordinator, spokesperson and press liaison for the FBI. In recognition of his leadership skills, he was promoted to several managerial positions, including Supervisory Special Agent in Washington, D.C., Chief of the Border Corruption/Crimes Task Force in San Diego, Legal Attaché in Athens, Greece, and Assistant Special Agent in charge in Tucson. Throughout his career with the FBI, Chief Black has focused on protecting civil liberties and safeguarding public integrity, as well as facilitating the personal and professional development of his employees and colleagues.

Throughout his career with the FBI, he has won numerous awards, including the Director of the FBI’s High Impact Leadership Award (2015 and 2017).