More ‘Ulu in Our Future?

For centuries, breadfruit has served as a major staple food in the Pacific Islands, and starting 200 years ago has spread widely across the global tropics. Lauded as a crop that could potentially transform tropical agriculture and address global hunger, breadfruit has high productivity, an excellent nutritional profile, and is a long-lived tree—whereas virtually all other world staples are annual crops. The United Nations’ Food and Agricultural Organization considers it an underutilized crop with extraordinary potential.

New work out of CTAHR’s Department of Tropical Plant and Soil Sciences and Department of Natural Resources and Environmental Management gives another reason for ‘ulu’s promising future: an expanding habitat suitability under climate-change scenarios over the next 50 years.

“More than 2,000 trees in the state were mapped to develop habitat parameters for breadfruit, which 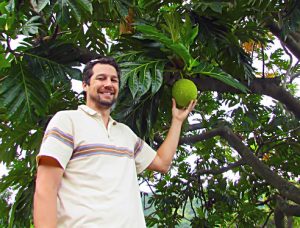 were then expanded using production data from another 50 or so sites,” says Noa Lincoln (TPSS), who manages the Indigenous Cropping Systems Laboratory. “The model was then applied globally and to future climate-change scenarios to examine how things might play out in the future.”

“Cultivation potential projections of breadfruit (Artocarpus altilis) under climate change scenarios using an empirically validated suitability model calibrated in Hawai‘i” was published in the May 22 edition of the journal PLoS One. The study uses Hawai‘i as a model system for understanding climate-change dynamics, using the high variation in temperature, rainfall, and soils to calibrate a model that shows high accuracy of predicting breadfruit production potential. 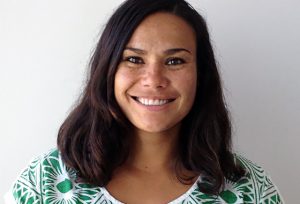 “It’s great to have the data to support what indigenous Oceanic cultures intuitively knew about breadfruit’s resilience, evidenced by the far-reaching extent of the tree’s migration and cultivation across the Pacific,” she says.

Noa adds, “While the emphasis on adapting agriculture to climate change has been focused on making our existing crops such as wheat, rice, and maize more resilient and adaptable, another strategy is to bring underutilized crops into our agricultural mix, and particularly tropical crops that are already adapted to warmer climates. These crops are also adapted to traditional cropping systems, such as agroforestry, that inherently have greater resilience to environmental changes and more environmental benefits such as carbon sequestration and erosion control.”

Contributing author Tomoaki Miura of NREM says models such as this are important to plan for the future. Hawai‘i may be ahead of the curve, with breadfruit plantings growing in the state. While breadfruit is on the rise for several reason, the future climate may be another important reason to plant an ‘ulu!

Should you experience difficulty in accessing this site, please contact our Secretary at tpss@ctahr.hawaii.edu.