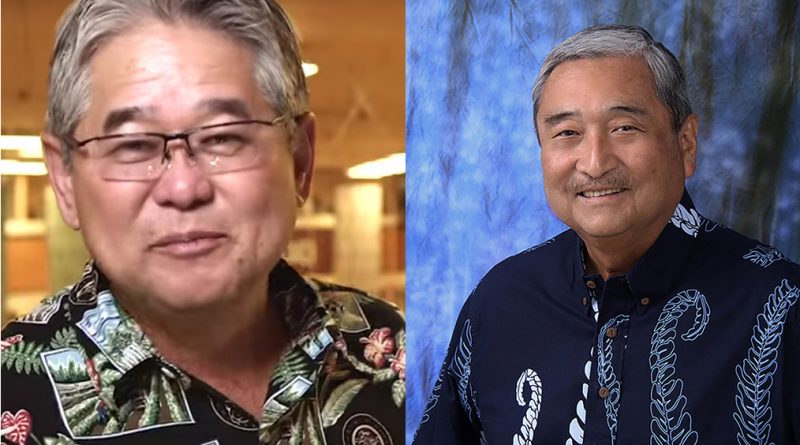 Ahaolelo State
June 28, 2020July 15, 2021 Admin
‘Aha‘ōlelo is a Hawaiian word meaning to come together for a meeting or congress and was chosen as the official name of the 4-H event in 1947. The ‘Aha‘ōlelo Ali‘i ceremony is a tradition that includes the recognition of honored guests and the “Gifts to the Ali‘i” presentation of locally significant gifts from each county 4-H program. Community members are chosen as Ali‘i based on the 4-H program values of leadership and community service.

This year’s recipients are Mr. Barry Taniguchi and Mr. Derek Kurisu of KTA Superstores. KTA has been a supporter of the Hawai‘i 4-H program for a long time and has purchased steers from livestock 4-H club members then sold the beef in the store with a clover on the package to show that it was a 4-H steer. They have also worked as a partner for 4-H group fundraising activities.

In an interview on Barry Taniguchi’s passing in 2019, Mr. Kurisu said about Mr. Taniguchi “He just left the state of Hawai‘i in a better place and he made it better.” The Hawai‘i 4-H program believes they both have actually made Hawai‘i a better place. And for that, our staff, volunteers, and members are eternally grateful. Mahalo nui loa. 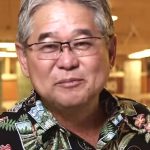 Mr. Kurisu is an alumnus of the College of Tropical Agriculture and Human Resources (CTAHR), where the 4-H program is housed in the University of Hawai‘i. In 2004 Mr. Kurisu was named Outstanding Alumnus of the college and in 2014 he was honored by the college for his advocacy of local agriculture products, including the creation of the Mountain Apple brand that partners with producers to feature items grown or made in Hawai‘i, to help strengthen and diversify agriculture and the economy.

Mr. Kurisu also started two cable television shows, Living in Paradise and Senior Living in Paradise, that promote the aloha spirit and feature the same positive support for the community and the uniqueness of Hawai‘i. Four-H members from several Big Island clubs have been featured on the Living in Paradise show and video segments are shared on the KTA website and their YouTube channel, which gives the community an opportunity to learn about the 4-H program and its commitment to service, something it shares with Mr. Kurisu. In a 2006 interview, he talked about the importance of customer service and in a 2012 PBS Hawai‘i Long Story Short interview, he discussed breaking down silos and working collaboratively, rather than competitively within Hawai‘i for the betterment of the community and the islands.

The Hawai‘i 4-H program is also better because of his support in highlighting the program in the community and providing clubs with opportunities to showcase their projects and practice public speaking through food demonstrations in the KTA Superstores. Mr. Kurisu is a great role model for 4 H members who can watch numerous videos of his food demonstrations where he teaches healthy, local-ingredient based recipes with a strong knowledge of local products and an easy-going, inviting personality that both educates and entertains.

In addition to the skills of leadership and public speaking, through the KTA Superstores, Mr. Kurisu continues to model other components of 4-H, such as healthy living and community, by offering alternative, healthful products such as low salt soy sauce, and fat free, sugar free, bakery items; promoting and selling locally grown produce and local beef products; and partnering with 4-H and CTAHR on programs such as health fairs, diabetes screenings, and National Food Day educational events. 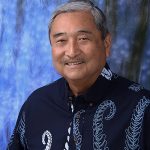 Barry Taniguchi was the chairman and CEO of KTA Superstores on the Big Island. He cared greatly for the community. He was a board member on several nonprofit organizations in the state and created community funds and endowments to support community-based programs. In 2016 he received a lifetime achievement award from the Hawai‘i Alliance of Nonprofit Organizations.

Mr. Taniguchi was a strong supporter of the University of Hawai‘i and its programs. He established the Taniguchi Memorial Fund and started UH Hilo’s first faculty endowments. In addition to graduating from Hilo High School he attended UH Hilo and UH Mānoa and earned a Bachelor of Business Administration degree with a major in accounting. He worked at several businesses in Hawai‘i but returned to KTA Superstores in 1983 and became president and CEO in 1989.

Mr. Taniguchi’s leadership skills set him apart, with a focus on keeping connections to the community and leading by example. In a 2010 article in Hawai‘i Business Magazine, Taniguchi discussed his idea of local-style leadership, where he described it as having “empathy, compassion, understanding, [and] putting yourself in the other person’s shoes” and added “Another thing is, you can’t fake local-style leadership. It has to come from within. The desire to want to help others and really nurture and take care of them has to come from the heart, or people will know you’re shibai.”

He was a strong believer in treating others as you wanted to be treated and in the value of being a good communicator. In a 2011 panel discussion at Shidler College he shared that “communication is a skill you need no matter what you do and that people cannot read your mind.” He emphasized the importance of getting people to understand why you do things, even if they do not agree.

Mr. Taniguchi’s attention to communication, community support, and leadership are in line with the 4-H mission to assist young people in developing life skills such as leadership, decision-making, and public-speaking and in forming attitudes that will enable them to become self-directing, productive, and contributing members of society. Leading by example, Mr. Taniguchi has provided an exceptional model of how to be successful in both business and life.

Barry Taniguchi passed away in September, 2019, but his son Toby, Executive Vice President Store Operations of KTA Superstores, attended the ceremony. The entire ceremony is available to watch on the Hawai‘i 4-H Youtube Channel