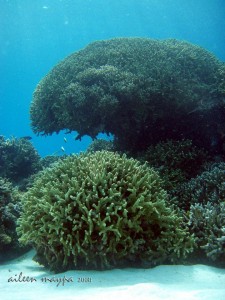 Tubbataha means, “a long reef exposed at low tide” in Samal, the native language of the Samal people of Mindanao and the Sulu Archipelago.  Tubbataha is the largest reef atoll in the Philippines.  It is located 150 km southeast of Puerto Princesa City, Palawan and at the center of the Sulu Sea.  Tubbataha is a habitat for thousands of sea birds, different types of corals, invertebrates, and marine animals such as sharks, manta rays, tunas, jacks, dolphins and turtles.  It is the Philippines’ first and only national marine park and among the “New 10 Wonders of Nature.”

The United Nations Educational, Scientific and Cultural Organization (UNESCO) recognizes it as a World Heritage Site just like the Pyramids of Egypt and the Great Barrier Reef in Australia, and it is the only marine UNESCO World Heritage Site in Asia.  You can see some of Tubbataha’s reef fishes by playing the memory game below.