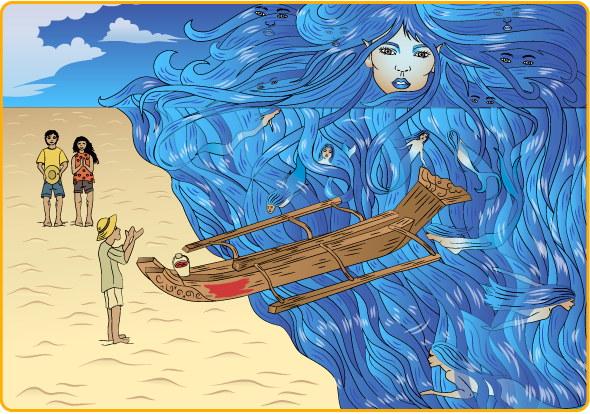 Indigenous spirituality and religion is the foundation of belief systems and worldviews.  Most Filipinos today practice Catholicism, a religion introduced by the Spanish colonizers in the 16th Century. While Christianity greatly influenced the Filipino belief and value system, indigenous knowledge and the Filipinos’ perception of power forms the foundation of their psyche.

Filipino culture is based on indigenous knowledge of the natural environment such as the forests and the seas.  This is where Filipinos perceive power to reside.  They consider it as a spiritual energy manifested in inanimate objects as well as in living things.  This is why many Filipinos in the southern part of the Philippines still utter the words, “tabi apo” when passing a large tree at night to show reverence to the spirits.

The spirit world in Filipino culture is strong and active.  It usually overlaps with daily life.  Spirits must be respected or else they can unleash their wrath through natural calamities such as typhoons, droughts, earthquakes, and volcanic eruptions.  Their happiness also ensures bountiful harvests.  This is particularly significant in the study of Filipino culture because they live in the Pacific Ring of Fire.  It is an area in the Pacific Ocean basin frequented by large numbers of earthquakes and volcanic eruptions.  To put it simply, their survival depends on the mercy of nature that they believe are controlled by environmental spirits.

The introduction of Christianity has put an interesting twist on Filipino spirituality.  While many might argue that indigenous Filipino knowledge, which is based on animistic conceptions of creative energy, would clash with Christianity, Filipinos have actually embraced both belief systems to form an inclusive syncretic form of spirituality.  This is evident in fishing rituals found in the Visayas in the central part of the Philippines.  The halad sa diwata o halad sa dagat, literally translated as offering to the goddess or offering to the sea, is performed to appease the tawo sa dagat, the supernatural people or spirits of the sea.  The following encantation is recited by a mereko or ritual officiant.

Fishermen credit their abundant catch to these types of rituals as well.  However, in instances where they fail, a local Catholic priest is summoned to offer a blessing.

Lesson 1: Valuing our Roots and Traditions

Students learn to value their home culture, particularly their ancestry and ethnic identity through the understanding of the uniqueness and intelligence of the indigenous beliefs and traditional practices of their people. They see how these kinds of knowledge are useful to surviving in today’s world and realize it is their responsibility to pass on this knowledge and positive attitudes to future generations.

1. Students define and discuss the terms culture, ethnicity, and indigenous. Have them provide examples.

Culture: “primary human toolkit”; values, symbols, perspectives, beliefs and behaviors shared by a human group. It helps determine the way we think, feel, and act, and is our lens through which we judge the world. It is one’s “home.”

Ethnic Group/ Ethnicity: A micro-cultural group or collectivity that shares a common history, culture, values, behaviors, and other characteristics that causes a group to have a shared identity.  A sense of peoplehood is of importance to an ethnic group.  Cultural characteristics, not biological traits, are the attributes of an ethnic group.  One’s roots or ancestry.

According to The World Council of Indigenous People, 1993:

“Indigenous People are such population groups as we are, who from old-age times have inhabited the lands where we live, who are aware of having a character of our own, with social traditions and means of expressions that are linked to the country inherited from our ancestors, with a language of our own and having certain essential and unique characteristics which confer upon us the strong conviction of belonging to a people, who have an identity in ourselves and should be thus regarded by others.”

2. Students identify and share their cultural and ethnic background(s) with the class. Locate their ancestral country on a map.  What do they know about their ethnic background? What are they proud about?

3. Students research who the indigenous people are in their ancestral country. Where are they located? What are their traditions and beliefs? What is their livelihood? What issues are facing indigenous people?

4. Read the quote below and analyze the meaning of it. Discuss with students whether this quote is positive or negative towards Fishermen.  What does “crude” imply? What can we learn from indigenous ways?

“Fishermen continue to hold on to their ‘crude’ methods of fishing which are well adapted to natural and ecological traditions.”  Yano, Takao.

“The Characteristics of Fisherfolk Culture in Panay: From the Viewpoint of Fishing Ground Exploitation.” In Fishers of the Visayas published by the Visayan Maritime Anthropological Studies, College of Social Sciences and Philosophy, University of the Philippines-Diliman in cooperation with UP Press.  1994.

5. A big part of Filipino culture is storytelling or “kuwento.”  Have students collect family stories and traditions that have been passed down.  Have students interview a family elder about the “old days.” Encourage students to learn about their family histories as far back as anyone can tell them.

6. Ask students how they would feel if they were told that their stories and traditions were “crude.” How would that make them feel?

For the Filipino, the spirit world is strong, active and pervasive. Filipino culture believes power resides in its natural environment such as the forests and the seas.  For indigenous people, there is much reverence for the power of inanimate objects as well as in living things. Respect for the diverse spirits influences Filipino daily interaction with their world.

1. Begin with chanting the fishing ritual below found in the Visayas in the central part of the Philippines.  The halad sa diwata o halad sa dagat, literally translated as offering to the goddess or offering to the sea, is performed to appease the tawo sa dagat, the supernatural people or spirits of the sea.  The following encantation is recited by a mereko or ritual officiant.

2. Students discuss how chanting the ritual made them feel. Did it make you feel hopeful? At peace? Focused on your task? Discuss the purpose of this encantation to appease the supernatural people or spirits of the sea so as to reap a bountiful catch.

3. Students discuss the definition of religion and spirits. According to anthropologist Clifford Geertz, religion is “a collection of cultural systems, belief systems, and worldviews that establishes symbols that relate humanity to spirituality and, sometimes, to moral values.”

4. Students share their own experiences with spirits, spirituality or religion. How do they merge their religion and spiritual world together? Look at Filipino culture as an example.

Students create their own spirit. Draw a picture of what he or she would look like.  What is its name? What is its significance? What important role would this spirit play in protecting and serving the environment? Write a short story about your spirit.

Lesson 3: Spirits of the Ocean

Students learn that spirituality is universal, but manifests differently in cultures.  Building on previous lessons in this module, students compare and contrast different mythology around the world, specifically looking at the spirits of the ocean.  Students will create a data retrieval chart to investigate common characteristics among these myths and spirits as well as how these myths are a unique reflection of the different cultures.

1.     Students discuss what mythology is. Mythology is the study of myths, a “sacred narrative explaining how the world and humankind came to be in their present form.” There are four characteristics that describe a myth.

(a)   The main characters are usually gods, goddesses, supernatural heroes and humans

(b)  People of importance (i.e. rulers and priests) find value in the story and it is often treated as truth

(c)   Often describes how the world was created

2. Students do a KWL chart on Greek, and Hawaiian mythology and Filipino beliefs. What do they know, what do you want to know, and what did you learn? Students activate their prior knowledge and pursue questions of interest.  They will later record what they learned at the conclusion of the lesson.

3. Students conduct research on the different Greek, and Hawaiian mythologies and Filipino beliefs and fill in the data retrieval chart below with their research.   What is the difference between mythology and beliefs?

Write a short essay that compares and contrasts the different myths. What did you learn? Were your questions answered? What questions do you still want to pursue?