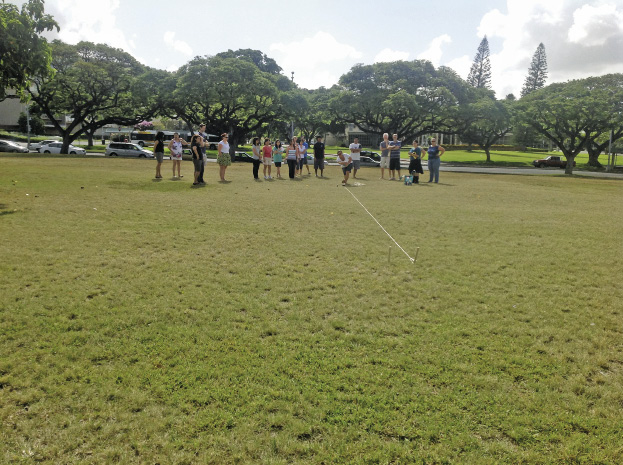 Posted at 11:35h in Mathematics, Professional Development, Year In Review 2013 by admincrdg
Share

The Math Teachers’ Circle (MTC) program was developed at the American Institute of Mathematics (AIM) and has grown into a nationwide movement aimed at establishing the foundation for a culture of problem solving among mathematics teachers in the United States. In 2013, the local program—Math Teachers’ Circle of Hawai‘i (MaTCH)—was in its third year and continuing to empower teachers to initiate more student-centered, inquiry-based pedagogies in their classrooms through a series of monthly meetings as well as a four-day summer retreat. While the monthly meetings continued to be popular with teachers, the summer retreat format allowed for extended time to do more pedagogical development that fostered teachers’ understanding of the Common Core State Standards’ (CCSS) eight standards for mathematical practice. These standards describe important processes and proficiencies that all students should develop. In addition to providing information on connections between the older National Council of Teachers of Mathematics (NCTM) standards and the CCSS, the MaTCH summer retreat emphasized the standards for mathematical practice in their daily blocks dedicated to pedagogical development. “It is easy for teachers to go right to content,” said Principal Investigator Linda Venenciano. “But implementing standards for practice and developing math practices in students is the game changer.”

Program evaluator Dr. Nicole Lewis of the UH COE Department of Educational Psychology reported on several positive outcomes of teachers’ participation in MaTCH. These outcomes included expanded knowledge of mathematics, shared resources and ideas from collaborating with other teachers, and increased familiarity with the Common Cores State Standards. Furthermore, teachers reported a renewed excitement for mathematics with one teacher writing, “I often get so bogged down in the day to day things in the classroom that I forget why I entered this field in the first place; my love for math and problem solving.”

In 2013, the MaTCH program continued to grow, in part with an $86,000 grant to fund its expansion to neighbor islands using the “e-table” model for synchronous professional development in disparate locations. This model was created by Educational Development Center, Inc. (EDC), a private non-profit education research and development organization in the greater Boston area, under a grant from the National Science Foundation. MaTCH and EDC partnered this year to bring an O‘ahu “table” into EDC’s pilot program and to help MaTCH use the model to expand its program throughout the state. Another focus of the grant was to build on the successes and lessons of the first two years to begin planning for long-term sustainability.