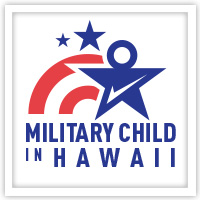 According to Department of Defense (DoD) databases, there are over twenty thousand school-age children of military families who reside in Hawai‘i, with approximately fifteen thousand enrolled in the state’s public schools, about 8 percent of the total public school enrollment. The Longitudinal Study of Military Child Education in Hawai‘i (better known as the Military Child Education in Hawai‘i Study) was commissioned by the United States Pacific Command (USPACOM) to help provide a picture of the educational needs and opportunities facing these students and their families.

Most military members stationed in Hawai‘i have a tour of duty lasting three years, and military families transitioning to Hawai‘i face unique challenges. These challenges include transition to a new culture, attendance at non-DoD schools, parental deployments, concerns about the quality of education, and the adjustment of school-age children to new schools and social situations. 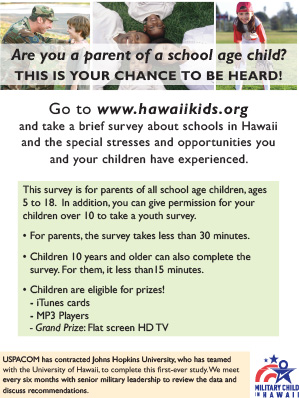 sing online surveys and face-to-face focus groups, the study’s specific objectives were to 1) document youth and parental perceptions of education in Hawai‘i and possible contributing factors; 2) explore how attitudes, concerns, and perceptions about education (public, charter, private, and home school) in Hawai‘i change over time; 3) identify the consequences of living and being schooled in Hawai‘i after families move to a new duty station; and 4) provide policy and programmatic guidance to assure that military families experience a positive tour of duty in Hawai‘i and that their children have optimal educational and social opportunities.

To date there has been no systematic, longitudinal survey sampling the same adults and children over multiple years. The Hawai‘i Department of Education (HIDOE) and USPACOM previously sponsored a series of cross-sectional studies, the most recent of which was HIDOE -funded and conducted by CRDG in 2006–2007 under the direction of CRDG’s Kathleen Berg with participation by researchers from the Johns Hopkins Bloomberg School of Public Health. Providing this longitudinal data is the central contribution of this new three-year study, also a partnership between Johns Hopkins Bloomberg School of Public Health and CRDG.

Data collection, both qualitative and quantitative, began in 2010 from those arriving on island. Longitudinal data collection began in 2011 from both on-island and change-of-duty parents and children. The study will conclude in mid-2012 with final results made available at that time.