Bringing Mathematics into the Community 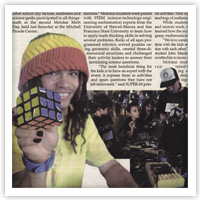 15 Mar Bringing Mathematics into the Community 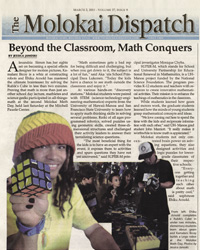 The School and University Partnership for Educational Renewal in Mathematics (SUPER-M) project, a National Science Foundation Graduate STEM Fellows in K–12 Education (GK–12) funded program, partners UHM graduate mathematics fellows with K–12 teachers. The goal of GK–12 is to enhance K–12 mathematics education while improving fellows’ ability to communicate and work in K–12 education. In the program, graduate students receive fellowship funding in exchange for working with a K–12 teacher-partner for approximately fifteen hours per week. CRDG’s Linda Venenciano is working with the University of Hawai‘i at Mānoa Department of Mathematics to help create these partnerships as well as to coordinate school and community outreach events.

In addition to their work in K–12 schools
during the school year, SUPER-M fellows participated in CRDG Summer Programs, where fellows designed and taught two math courses, one for elementary students and another for middle-school students. Topics in the courses included cryptography, verification of statistical claims, robotics, digital animation programming, and game theory. In the community, SUPER-M sponsored a variety of events throughout the state including Moloka‘i Math Day held in March in Kaunakakai and a community workday in Nānākuli in April. Fellows coached the Noelani Elementary School team in the Math Olympiad 2010 and joined other STEM graduate students in December at a Science Night organized by the Graduate Women in Science, Hawai‘i Chapter. Farther afield, SUPER-M collaborated with la Commission Genevoise de l’Enseignement des Mathématiques in Geneva, Switzerland on the International Week of Math 2010 in October. The math lessons were translated by SUPER-M fellows for implementation in Hawai‘i schools.

SUPER-M also held a series of three workshops in the fall of 2010 that focused on teachers. Each workshop incorporated a talk from a mathematics professor and a series of hands-on activities designed and delivered by the fellows. These resulted in several teachers indicating interest in becoming future SUPER-M partner teachers.

Based on an idea that started at the American Institute of Mathematics (AIM) in 2006, SUPER-M started a Math Teachers’ Circle of Hawai‘i this year. Described by project manager Linda Venenciano as “like a book club for people who enjoy doing math,” the Hawai‘i group is part of a large and growing network of math teachers’ circles. Designed to engage math teachers in mathematical problem solving and involve them in an ongoing dialogue, the groups aim first and foremost to create a culture of problem solving by fostering the enjoyment of mathematics among teachers. Anyone interested in participating can contact Linda Venenciano at lhirashi@hawaii.edu or 956-4985.