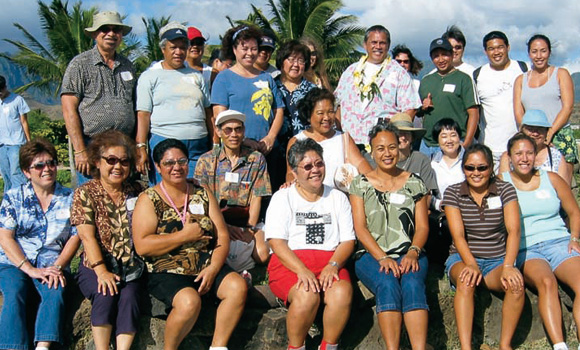 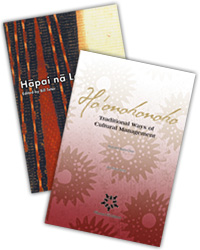 In addition to their work in the schools, the project worked for several years to publish a series of eleven books on Native Hawaiian virtues and values by noted cultural specialist Malcolm Nāea Chun and published the final title, Ho’onohonoho, in 2009 to complete the series. In addition, ULS English teacher and curriculum developer Bill Teter joined the project team to produce an anthology of current literature that reflects the themes presented in Chun’s work. Hāpai nā Leo opens with an excerpt from the Kumulipo, closes with a piece of award-winning slam poetry, and in between celebrates a diverse range of voices that explore, carry, and regenerate Hawaiian culture.

The success of the Pihana Nā Mamo project has been recognized with the granting of additional funds to carry on the work in two new three-year Native Hawaiian Education program (NHEP) grants (the fourth and fifth grants awarded to this highly successful collaboration).

Kāko’o Ikaika: Supporting Adolescent Hawaiian Students to Achieve High Standards was funded for $2,485,671 and Heluhelu Maoli: Building Strong Foundations in Reading and Mathematics was funded for $3,116,859. Both projects continued the strong partnership between CRDG and the Hawai’i Department of Education.