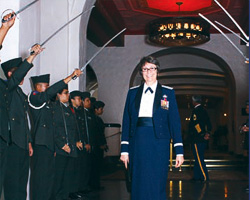 With their families’ frequent relocations in service to our country, military-dependent children often attend as many as nine different schools from kindergarten to twelfth grade. The problems they encounter with enrollment, eligibility, placement, and graduation have long been a concern of military families and the organizations that support them. CRDG associate director Kathleen Berg, as a former military dependent herself and a thirty-one year veteran of the Hawaii Air National Guard, has brought a level of insight into both the military and educational aspects of these issues in her partnerships with the Hawai’i Department of Education, the U.S. Pacific Command, the Department of Defense Education Activity (DoDEA), the Joint Venture Education Forum (JVEF), and other groups. This year Hawai’i became one of twenty-seven states to join the Interstate Compact on Educational Opportunity for Military Children, which provides for the uniform treatment of military children transferring between school districts and states, and Berg was appointed by the state Board of Education as the first Hawai’i state commissioner. As commissioner, Berg represents Hawai’i and, with the Interstate Compact State Council, facilitates implementation of the compact within Hawai’i public schools. Berg was elected vice chair of the national commission at their November meeting.

Berg has also brought the talents of CRDG to bear on issues involving education for military children through her longtime membership in the Joint Venture Education Forum, a cooperative venture between the military community and the Hawai’i Department of Education in pursuit of quality public schools. Following a CRDG-led 2006 survey on education for military families in Hawai’i, which involved the JVEF and Johns Hopkins University, this year she joined Johns Hopkins researchers in the first year of their longitudinal study of military families. Formerly a member of the JVEF Board of Directors, Berg serves as the co-chair of the JVEF Information and Communications Strategy Group and served as a host for the 2009 JVEF annual meeting in August.

CRDG’s long-time relationship with DoDEA, the agency that operates schools for military dependents all over the world, dates back to 2002 with the School Assisted Interactive Learning (SAIL) and School Safety projects. The collaboration continued this year with mathematics education specialist Linda Venenciano’s and Berg’s invitation to participate in the DoDEA Virtual School Working Group in Utah. In addition, Dr. Marc Mossburg, Chief of Curriculum for DoDEA, served on the Advisory Board of CRDG’s Standards Streamlining Project (SSP), while Jean Grice, the DoDEA representative to the U.S. Pacific Command, located in Hawai’i, was a regular participant in SSP project meetings. CRDG hosted Mossburg in May and DoDEA Director Dr. Shirley Miles in December. Standards-based education and teacher professional development are two major areas where CRDG has found networking and collaboration with DoDEA to be invaluable. 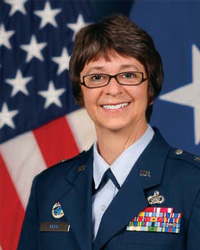 While we at CRDG know her as an education researcher and our associate director, Kathleen Berg wrapped up a distinguished career as a traditional member in the Hawai’i Air National Guard (HIANG) in April 2009 when she retired at the rank of brigadier general after 31 years of service. Berg received her commission as a distinguished graduate of the Air National Guard Academy of Military Science in 1977. She served for seven years as the Commander of the 293rd Combat Communications Squadron at Hickam AFB, Hawai’i. From 2000 to 2006, she held various positions at HQ HIANG, including Director of Communications and Information and Chief of Staff. Most recently, she served as Mobilization Assistant to the Director, J6, United States Pacific Command (PACOM) at Camp H. M. Smith, Hawai’i.