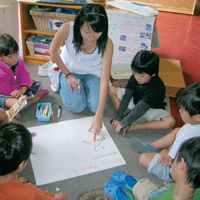 In 1966, Arthur R. King, Jr. and John A. Brownell articulated a theory of curriculum practice founded on the idea that the basis for liberal and general education should be a community of learners engaging in inquiry. King was given the opportunity to test this hypothesis when he became the founding director of CRDG, and over forty years later, the idea of inquiry practiced among a community of learners is still the foundation upon which CRDG’s curricula are built. The extension of the inquiry framework into pre–K in the new early childhood project gave the science team of Frank Pottenger and Carol Brennan, who helped create the elementary curriculum Developmental Approaches in Science, Health and Technology (DASH), the opportunity to apply their many years of experience in learning how inquiry actually works classrooms and extend this knowledge into the development of a curriculum for even younger children.

Pottenger is engaged in developing a deeper understanding of the theory of inquiry. As a basic introduction, he writes that “inquiry is a cognitive survival mechanism of our species, the mechanism by which we humans know and make sense of our surroundings. Inquiry begins with needs, questions, or problems and ends with products that attempt to provide satisfaction, answers, or solutions.” His hierarchy of inquiry describes multiple modes of inquiry beginning the most fundamental—curiosity—and moving through increasingly complex modes to culminate in the experimental and theoretical. 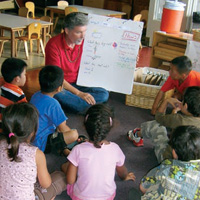 Brennan is collaborating with teachers Yukyong Hwang and Jeffrey Bock and director Wayne Watkins at the University of Hawai’i at Mānoa Children’s Center (UHMCC) and with teachers Jolynn Komada, Maki Hohnstein, Shane Joyce, and Courtney Brown and principal Sheri Gulledge at the Navy Hale Keiki School (NHKS) to study potential elements for an inquiry-based curriculum that addresses the developmental stages of threeand four-year-olds. 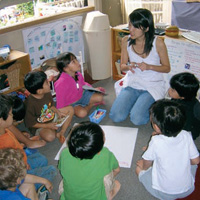 Preschool children at the University of Hawaii at Manoa Children’s Center create a concept map to summarize and organize what they already know about a topic.

Brennan is developing an activity modeled on the DASH Learning Calendar. Contributions and feedback from the UHMCC and NHKS teachers drive the modifications that allow it to be used with young students. The learning calendar concept promotes learning in several areas including language and literacy and developing the concept of time. Another inquiry learning strategy being investigated is the use of concept mapping with young children. Using the existing research on forms of and uses for concept maps, and drawing on her extensive experience both as curriculum developer and teacher as well as her dissertation research on the use of concept maps in the DASH program, Brennan has worked together with teachers to develop and implement concept mapping techniques with pre–K children. Concept maps are used to assess students’ prior knowledge of a topic; summarize, organize, and assess ongoing learning about a topic; and assess and record class knowledge of a topic. Teachers lay a foundation of pre-mapping skills such as sorting, classifying, patterning, and sequencing, before introducing concept maps. Children are initially engaged in the creation of maps using concrete objects such as the map of musical instruments created by Yukyong Hwang’s class at UHMCC. Photographs and pictures are used extensively as the children transition to more abstract maps, culminating with an almost traditional version of a concept map on paper as illustrated by Hwang’s class concept maps about composting. To enhance literacy development, teachers, and children as they are able, add words to the concept maps. Jeffrey Bock of UHMCC invented a technique using the connecting lines on a map to record students’ reasons and ideas about item placement into particular categories. “The evidence of inquiry skill and language development in these young learners is just astounding,” reports Brennan.