CRDG’s long-time commitment as a founding member of the Pacific Circle Consortium continued with a delegation’s attendance at the 33rd annual conference in Taipei, Taiwan.

As a founding member of the Pacific Circle Consortium (PCC), CRDG has had a long-standing commitment to education in and about the Asia-Pacific region. This year CRDG helped improve communication within the PCC and helped them gain an online presence with the development and hosting of a new PCC website.

CRDG director Donald Young is working with School of Pacific and Asian Studies Dean Ned Schultz in collaboration with the University of Hawai’i’s Center for Chinese Studies (CCS) and the Confucius Institute on the Chinese Language Teacher Education program (CLTE). Funded by the Freeman Foundation, CLTE is specifically designed to increase demand and provide qualified teachers to teach Chinese language in Hawai’i and beyond. It brings together expertise from the College of Education, the School of Pacific and Asian Studies, the Center for Chinese Studies with its Confucius Institute, and the Departments of East Asian Languages & Literature and Second Language Studies. CLTE recruits and provides support for a non-licensure certificate program as well as a postbaccalaureate certificate program that prepares teachers for a Hawai’i teaching license. The grant also supported a series of six workshops in the fall of 2009 for pre- and in-service Chinese language teachers. The series offered advanced training in a range of specific topics to further develop effective teaching skills in Chinese language. 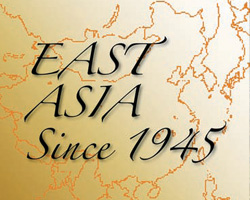 CRDG’s Linda Menton and Noren Lush completed the writing of instructional materials on modern East Asia that focuses on China (including Hong Kong and Taiwan), North and South Korea, and Japan as a region in the modern world. Funded by the U.S. Department of Education, East Asia Since 1945 will be the latest in CRDG’s series of high school texts on Asia and the Pacific. Other titles in the Asia series include China: Understanding Its Past and The Rise of Modern Japan, both award-winning high school social studies texts that are activity-oriented and enhance students’ understanding of the history and culture of the region through maps and timelines, archival photographs, literary excerpts, first-person accounts, diary entries, songs and poems, charts and graphs, and political cartoons. This series, which responds to a particularly acute need in high school social studies, carries on a long tradition in CRDG of producing curriculum materials that address the Asia and Pacific regions and their diverse cultures.

CRDG Partners with JABSOM to Expand Science in the Pacific 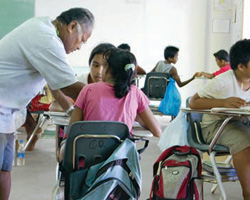 Teachers in Phonpei learn inquiry strategies for teaching science, then take them back to their own classrooms.

CRDG became a partner with the John A. Burns School of Medicine ( JABSOM) this year on the Pacific Education and Research for Leadership in Science (PEARLS) project, which seeks to help middle school students in Hawai’i and the Pacific region learn more about scientific inquiry and the kinds of careers available to them in science and technology. The five-year project will train a cadre of teachers in the use of CRDG’s award winning Foundational Approaches in Science Teaching (FAST) middle school science program. FAST covers the full three-year middle school span with inquiry-based investigations that teach foundational concepts of physical, biological, and earth sciences, providing a strong foundation for students to succeed in high school and post-secondary science courses. CRDG’s marine science curriculum for ninth grade will complete a four-year program of science for schools and districts participating in the program. The PEARLS project worked with their initial group of twenty teachers from Hawai’i, Yap, Phonpei, and American Sāmoa in its first year. Teachers came to O’ahu in the summer for the initial training institute, and follow-up has been carried out both in person through site visits by CRDG staff and through monthly meeting via Skype. A new group of teachers will be added each year of the five-year project.