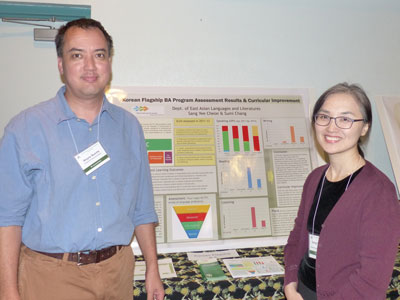 As the only institution of its kind in the world, the UHM Korean Language Flagship Center (KLFC) undergraduate program has been funded by the National Security Education Program since Fall 2008. The KLFC’s goal is to prepare American students to be capable of functioning in Korean as professionals in their chosen academic or professional fields. Flagship student performance is monitored and evaluated via various types of tests, which are administered on a regular basis throughout the program. The assessment tools that the KLFC BA program uses were developed externally and internally to measure students’ Korean language proficiency in four language skills. One of the assessment tools is an official ACTFL Oral Proficiency Interview (OPI) for speaking, provided by the College of LLL for all graduate BA language majors. Twenty-two Korean Flagship BA students from Spring 2011 to Fall 2013 have taken the official ACTFL OPI tests, and 21 out of 22 students’ speaking proficiency has improved over the two or three year period. We present these exit OPI results along with the entry OPI results to demonstrate the improvement in the student speaking proficiency. Furthermore, based on the exit scores, the Korean Flagship program has implemented changes for curricular improvement. This poster also displays curricular adjustment we have made, and the changes are expected to result in further improvement of our student speaking proficiency. By Sang Yee Cheon and Sumi Chang