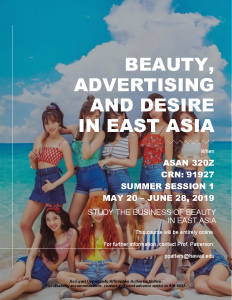 ‘Tis the season to register for Spring 2019 classes!

Please see the flyers below for special offerings in the Asian Studies Program for the upcoming semester.

Click on the flyers for each class to see more detailed information.

Asian Studies 651: East Asia Now
F 2:30 – 5:30
ASAN 651 Spring 2019 Flyer
An interdisciplinary approach to the study of social, economic and political development, as well as foreign relations among the major countries in East Asia.

Asian Studies 750 C/J/K: Writing & Research Seminar: China, Japan and Korea
M 4:00 – 6:30
ASAN 750 Spring 2019 Flyer
An interdisciplinary seminar to support students in completing a research paper on a topic of their choice, while providing a structured overview of the writing and research process.

ASAN 464, a summer session course on K-Pop and J-Pop, was recently featured in Ka Leo, the student newspaper. This unique course combines business, cultural studies and pop culture studies and was a whole lot of fun for fans or wannabe-fans. 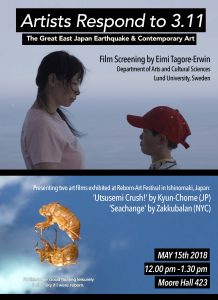 Eimi Tagore-Erwin, a graduate student in Visual Culture at Lund University, Sweden, will present a portion of her thesis that she completed as a Visiting Researcher in the Asian Studies Program at UHM in spring 2018.

The topic of her thesis is ‘Reborn-Art Festival’, a socially-engaged art festival that took place in Ishinomaki, one of the communities that was hardest-hit by the 2011 earthquake and tsunami in Japan. Through consideration of artists’ responses to the Great East Japan Earthquake as a way of engaging in the socio-cultural work of ‘making sense’ of the catastrophe, her study of Reborn-Art Festival’s inaugural cycle investigates art’s potential to contribute to community recovery and empathic understanding of trauma.

She will introduce and screen two short art films exhibited by two artists’ units as part of Reborn-Art Festival, before opening up the floor for discussion, questions, and responses to the films.

The featured films are:

Utsusemi Crush! by Kyun-Chome, a nomadic socially-engaged Japanese artist unit formed in 2011 following the triple disaster, made up of Eri Honma (b. 1987 Kanagawa Prefecture) and Nabuchi (b. 1984 Ibaraki Prefecture).

Seachange by Zakkubalan, a New York-based American artist unit made up of filmmakers Neo Sora (b. 1991, New York) and Albert Thoren (b. 1992, Washington D.C.).

University of Hawaiʻi at Mānoa is an Equal Opportunity / Affirmative Action Institution
This event is free and open to the public. 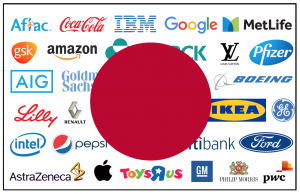 The Asian Studies Program invites all to a talk by Dr. Kristi Govella, candidate for the position of Assistant Professor of Asian Studies. The talk is entitled “Permeable Policymaking: Foreign Firms in the Japanese Economy,” and will be held on Thursday March 2, 3:00-4:00 pm, in the Center for Korean Studies Auditorium.

Abstract: How does internationalization affect the politics of trade? Can foreign firms meaningfully influence policy? Japan is an interesting place to examine these questions because it was remarkably closed to foreign investment until a sudden influx in the 1990s. While foreign firms were initially dependent on their home governments to influence Japanese policy, opportunities for these firms to act independently increased with the opening of the Japanese economy. Interestingly, the manner in which a sector opened had lasting and sometimes unexpected consequences, creating cleavages among Japanese and foreign firms in ways that shaped their interests and the trajectory of policy change. This research sheds light on the ways that internationalization can enable foreign firms to impact policy debates directly from within a host country, potentially altering the dynamics of both domestic politics and international relations.

About the Speaker: Kristi Govella is an Associate Professor at the Daniel K. Inouye Asia-Pacific Center for Security Studies, specializing in Japanese politics and Asian regionalism. She holds a Ph.D. in Political Science from the University of California, Berkeley. 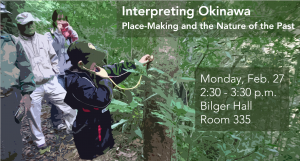 The Asian Studies Program invites you to a talk by Dr. Andrea Murray, “Interpreting Okinawa: Place-Making and the Nature of the Past,” on Monday, February 27, from 2:30-3:30 pm, in Bilger Hall 335.

Abstract: “Nature” in Okinawa is a thing of the past. This talk considers how a sense of unique ecological heritage is cultivated and expressed through facilitated interactions between human and non-human animal species, both for the education of tourists and for the benefit of residents. In a move to direct the island’s economy away from U.S. military base dependency, local entrepreneurs are reclaiming their past through engagement with the natural environment. “Nature” is also a matter of interpretation.

About the Speaker: Andrea E. Murray is an Associate in Research at the Reischauer Institute for Japanese Studies, Harvard University. Her book, Footprints in Paradise: Ecotourism, Local Knowledge, and Nature Therapies in Okinawa (Berghahn Books 2017), is an ethnography of island political ecology and sustainable tourism development.