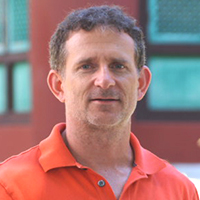 Robert Perkinson received his B.A. in History from the University of Colorado at Boulder (1994) and his Ph.D. in American Studies from Yale University (2001). His teaching and research interests include: social and political history, crime and punishment, race and politics, U.S.-world history, and social movements.

Perkinson’s book, Texas Tough: The Rise of America’s Prison Empire (Metropolitan Books/Henry Holt, January 2010) is a history of imprisonment, race, and politics from slavery to the present. Drawing on archival, legal, and ethnographic research, the book argues that the history of American penality is a more southern story than most have acknowledged and that the politics of race and reaction propelled the U.S. prison boom in the post-civil rights era.

Texas Tough won the PASS Award of the National Council of Crime and Delinquency and the PEN American Center’s John Kenneth Galbraith Award for best book of non-fiction published in 2009 and 2010.

Perkinson has written in scholarly and popular forums on a range of topics, including: terrorism and foreign policy, the World Bank in Asia, unexploded ordinance in Laos, race relations in the age of Obama, and Anglo-American legal history. His work has been published in the New York Times, New Republic, Boston Review, The Progressive, and The Nation.