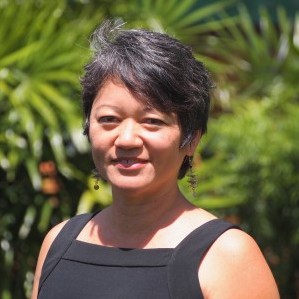 In March of 2014, Noelle joined the American Studies Department as an Assistant Specialist in Public Humanities and Native Hawaiian Programs. Of Hawaiian, Japanese, Chinese, and Scottish descent, she received her BA in Political Science from the University of Hawai‘i and her JD from the William S. Richardson School of Law.

From 1992-1997, Noelle served as Counsel to the U.S. Senate Committee on Indian Affairs in Washington, D.C. under the leadership of Senator Daniel K. Inouye, where she worked on issues affecting Native Americans, including self-determination, education, housing, welfare reform, religious freedom, and cultural and historic preservation.  Following her return home, she worked for the Office of Hawaiian Affairs and the Native Hawaiian Education Council before joining Bishop Museum in 1998.  In her 15 years there, Noelle held various positions, including cultural inventory specialist, project manager, and Director of Community Affairs.

Noelle’s Hawaiian program and exhibition experience is extensive.  She has developed over 25 exhibitions incorporated the works of more than 100 native artists and was a member of the internal project team which guided the historic renovations of Bishop Musuem’s Hawaiian Hall (2009) and Pacific Hall (2013).  She was also instrumental in the 2010 landmark exhibition, E Kū Ana Ka Paia, an international gathering of the last three Kū temple images in the world.

In 2010, Noelle completed a decade-long film project, “Under a Jarvis Moon,” which documented the accomplishments and sacrifices of 134 young men of Hawaii who lived on remote islands in the Pacific in the years preceding World War II. The film was nominated for a Halekulani Best Documentary award from the Hawaii International Film Festival and has been shown locally, nationally, and internationally.

Noelle is pleased to have joined the American Studies Department and will be providing support to the department’s graduate certificate programs as well as developing course offerings and workshops on indigenous curation, public policy, and grant writing and management.