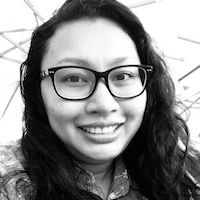 Marimas Hosan Mostiller is an American Studies Ph.D. Candidate at the University of Hawai‘i at Mānoa. Upon completion, she will be one of the first Cham Americans to earn a Ph.D. in the U.S. As a first-generation college student, she earned a B.S. in Psychology from the University of La Verne, a M.Ed. in Postsecondary Administration and Student Affairs from the University of Southern California, and a M.A. in Ethnic Studies from San Francisco State University.

Marimas is a second-generation Cham American, a descendant of the Kingdom of Champa which is currently occupied by present-day Vietnam. Her parents came to the United States from Cambodia as refugees of the Khmer Rouge genocide, and settled in Santa Ana, California.
As an interdisciplinary researcher and scholar, Marimas’ research is mixed-methods and blends the methodological frameworks of social science, cultural studies, museum studies, and Asian American critique. Her dissertation, which is titled “Indigenous Asian Muslim Refugees: The Complex Identities of Cham Americans,” examines and analyzes the identities and experiences of Cham Muslim Americans who are Indigenous to present-day Vietnam, Asian Americans, Muslims, and refugees or children of refugees from the Vietnam War and the Khmer Rouge genocide.

Marimas’ experience growing up in a traditional Muslim household among other working-class, immigrant, Latinx, and Khmer communities prompted her interest in higher education advocacy, ethnic studies, and social justice. She has worked for a number of higher education pipeline programs and plans to continue advising and mentoring undergraduate students in the future as a professor.