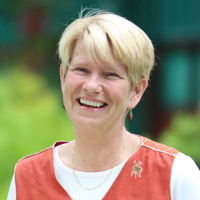 Kathleen Sands was educated at Harvard Divinity School (M.T.S.) and Boston College (Ph.D.).  She previously taught at the University of Massachusetts in Boston, where she directed the Religious Studies program and was jointly appointed in American Studies and Women’s Studies.

Although trained in theology, Professor Sands’ research has expanded into religion and sexuality, religions in American history/law/public life, and critical religious studies. She has lectured at many universities in the U.S., including Harvard Divinity School, Yale Divinity School, the University of California at Santa Cruz, Drew Divinity School, and Harvard’s Kennedy School of Government. She is author of Escape From Paradise: Evil and Tragedy in Feminist Theology, and editor of God Forbid: Religion and Sex in American Public Life. Her articles have appeared in New Literary History, The Journal of Theology and Culture, The American Indian Law Review, The Journal of the American Academy of Religion, The Journal of Feminist Studies in Religion, and in The American Quarterly.  She has been a research fellow at Harvard University’s Center for the Study of Values in Public Life, and at the Radcliffe Center for Advanced Studies.
Her latest book is The Heart of the Existing Order: Religion and Conflict in American Public Life.