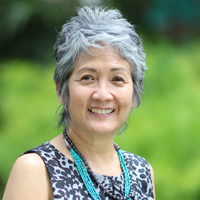 Ms. Kosasa is interested in interdisciplinary research.  Trained in painting and drawing, for thirteen years she taught in the studio arts at the University of Hawai‘i, the University of Rochester, and Boise State University.  Her dissertation (2002) examined studio arts curricula within the contexts of colonialism and nationalism.  It included an extensive ethnography conducted in the art department at the University of Hawai‘i, and a review of early critiques of the arts curricula in the United States in the 1990s.  In 1998, based on her developing research, she was hired by Boise State University to assist in redesigning its foundation arts curriculum for 500 majors.  She developed an unorthodox curriculum where students were required to read and write about semiotics, popular culture, and Native Americans and colonialism, alongside standard studio assignments.  Her curricular strategies were informed by conversations with artists, educators, and scholars in the fields of art and art history, critical pedagogy, and cultural studies, with the objective of intervening in the “unreflective” production of art in and outside of schools.  Although controversial at the time, these kinds of pedagogical approaches are no longer considered unusual.

In 2002, Ms. Kosasa joined the Department of American Studies and developed the curriculum for the Museum Studies Graduate Certificate Program.  After consulting with members of the Hawai‘i Museums Association, local museum administrators, and university educators, and using her familiarity with curriculum development, museums and art gallery practices, and issues raised by scholars and museum professionals identified as the “new museology,” she structured a certificate curriculum that would deliver theoretical, historical, educational, and practical information.

Ms. Kosasa is involved in a long-range project that examines how museums and related institutions represent colonial histories and the often contentious relationship between indigenous peoples and settler states.  In “Searching for the ‘C’ Word: Museums, Art Galleries, and Settler Colonialism in Hawai‘i” (2011), she describes the difficulty of finding written references to “colonialism” (or “occupation”) in museums, and addresses the pedagogical consequences of these institutional erasures and disavowals.  She believes that settlers such as herself—a third-generation Japanese American—have an ethical obligation to educate visitors about the histories of settler colonialism in the United States so they might better understand the present-day problems faced by many indigenous peoples and their struggles for political independence.

Ms. Kosasa is chair of the UH Museum Consortium which supports collection and exhibition units in the University of Hawai‘i system by sharing resources and sponsoring activities.  The consortium maintains the Virtual Museum site.  She works closely with the Hawai‘i Museums Association and local museums to co-sponsor public events and professional development opportunities.  As a member of the 2011 Western Museums Association Program Committee for its annual meeting, Ms. Kosasa organized three panels on representing native-settler histories, the importance of institutional support for artists and art exhibitions, and the work of the Pacific Islands Museums Association, and raised funds for the keynote address by the Honorable Ralph Regenvanu, Minister of Justice and Community Services, Vanuatu.  She is chair of the Executive Board of the King Kamehameha V Judiciary History Center in downtown Honolulu, and sits on its newly formed exhibition renovation committee.

From the early 1990s through 2010, Ms. Kosasa exhibited both personal and collaborative bodies of mixed media art work.  Her twenty-year collaboration with photographer and educator Stan Tomita involved several photo-text installations.  In “Sites of Erasure: The Representation of Settler Culture in Hawai’i” (2008) she describes the arc of their work and how it was created to explore their identities as settlers in the United States and their relationship to the historic expropriations of Native Hawaiian land.  In a review of their 2009 installation, “Re-educating Karen and Stan/Re: 50th Anniversary of Hawai‘i Statehood,” cultural critic Candace Fujikane interprets a series of photographs of the artists posed in front of their respective grammar and high school buildings as documenting “their pedagogical trajectory.”  As sites of learning these institutions helped “shape their imaginaries as settlers.”  Through this work, she explains Ms. Kosasa and Mr. Tomita “engage in a form of Asian American critique” of the settler society in Hawai’i.  (Forthcoming, Inter-Asian Cultural Studies, 2012)