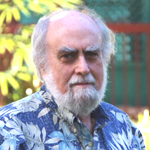 Social and Cultural History
Race and Racism
Theory and Method

David E. Stannard received his BA (American Studies) from San Francisco State University and his MA (History), MPhil, and PhD degrees (American Studies) from Yale University.  In addition to the University of Hawai`i, which has awarded him its Regents Medal for Excellence in Teaching, he has taught at Yale and, as a visiting professor, at Stanford University and the University of Colorado.  He is a Guggenheim, Rockefeller, and American Council of Learned Societies Fellow and has lectured in Asia, Europe, Oceania, and throughout the United States.

In addition to articles in the leading scholarly journals in his field, including The American Historical Review, American Quarterly, and the Journal of American Studies, Professor Stannard’s work has appeared in such general circulation publications as The Nation, The New Republic, The Chronicle of Higher Education, Cultural Survival Quarterly, and more.  Publications of his have been translated into Spanish, French, German, Italian, Japanese, Slovenian, and Turkish.  His books include:

Honor Killing: Race, Rape, and Clarence Darrow’s Spectacular Last Case (Viking Penguin).  “Finely written and meticulously researched…a biopsy of the racist and imperial arrogance that are an integral, though seldom acknowledged, motif of the history of America.”  New York Review of Books

American Holocaust: The Conquest of the New World (Oxford University Press).  “A devastating portrait of the death, disease, misery, and apocalyptic destruction experienced by American Indians during the centuries after 1492.”  Washington Post Book World

Before the Horror: The Population of Hawai`i on the Eve of Western Contact (University of Hawai`i Press).  “[Written] with sensitivity, grace, and verve…A powerful study of the catastrophic destruction of the Hawaiian people…it will compel the rewriting of island history.” American Ethnologist

Shrinking History: On Freud and the Failure of Psychohistory (Oxford University Press).  “Devastates the pretensions of psychohistory and in the course of doing that mounts an out and out attack on psychoanalysis as a theory and a therapy…makes the whole enterprise appear irretrievably dubious.”  The New Republic

The Puritan Way of Death: A Study in Religion, Culture, and Social Change (Oxford University Press).  “Extremely valuable…Uses theological beliefs skillfully to interpret social practices and at the same time provide a new historical perspective from which to interpret, and change, the modern American way of death.”  Journal for the Scientific Study of Religion

Death in America, editor (University of Pennsylvania Press).  “Impressive…reinforces the emancipation of American Studies from its preoccupation with American ‘uniqueness’…[and] restores death to its appropriate place in contemporary consciousness.”  Reviews in American History